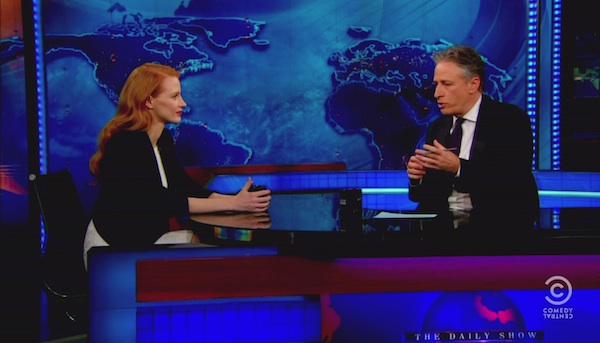 Jon Stewart and the NRA: a comedic match made in heaven. Stewart, the openly liberal host of The Daily Show, clashes with the National Rifle Association over their recent attack ad aimed at preventing increased gun control measures. Jon Stewart calls the NRA ad, which uses President Barack Obama‘s children’s safety as its focal point, so ridiculous it could be mistaken for a joke.

“America is in the midst of a serious conversation about guns. The NRA has been very clear that it would meet any attempt to put limits on gun ownership with a great deal of resistance and they are sparing no expense getting the message out.” Stewart then goes on to play the recent NRA gun control attack ad aimed at President Obama.

After the ad runs, Stewart comments in a sarcastic, melancholy tone: “And why does he get to veto bills and command an army and we don’t?” Stewart continues, “All right, the conversation has started and we’re off to a deplorable start.”

President Obama on The Daily Show >>

Stewart then calls the NRA ad a bit too off base, to the point where many might mistake it for a joke. “I swear, if I didn’t know any better — and I’m not a big conspiracy guy — after seeing that ad I would think the NRA is either an elaborate, avant-garde, Joaquin-Phoenix-style joke [audience laughs] or a false-flag operation run by Michael Moore in an attempt to discredit responsible gun owners.”

We have the Jon Stewart NRA clip below, featuring the NRA attack ad: