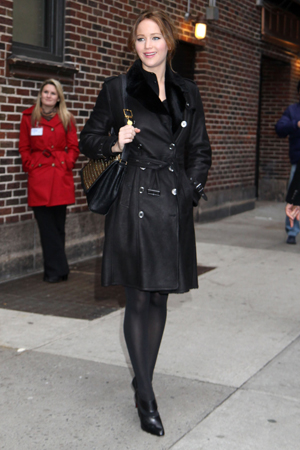 “It was a quote from First Wives Club!” Jennifer Lawrence told David Letterman Tuesday, just days after she’d ticked off the Twitterverse by proclaiming, “I beat Meryl,” onstage at the Golden Globes.

That’s what Lawrence was referring to onstage, not trying to dis Meryl or her fans.

Nonetheless, Twitter went crazy for a few minutes trying to figure out Lawrence’s remark, while Lindsay Lohan tweeted, “no1 should ever mess with a legend, such as Meryl Streep.”

“It’s never a good idea for me to wing it,” Lawrence sighed on Letterman.

It should be noted that what Lawrence actually said on the Globes was, “What does it say? ‘I beat Meryl!'”

It should also be noted that Streep was up for a Globe against Jennifer Lawrence for Best Performance by an Actress in a Motion Picture — Comedy or Musical. Lawrence won for Silver Linings Playbook, and Streep was nominated for Hope Springs.

So Lawrence’s remark had a little extra (likely unintended) sting to it.

Nonetheless, Lawrence was irritated by the criticism she got. “I had no idea Lindsay Lohan would take to the Twitterverse,” Lawrence told Letterman. “Twitter is very upset.”

“First of all, it’s Meryl Streep! You can’t offend Meryl Streep!” she said, although she admits she hasn’t heard from Streep about the remark (Streep didn’t attend the Globes due to the flu).

“I wanted to make a public statement like ‘Hey, idiots. It’s a quote from a movie.'”

Done, and done. Now Lindsay Lohan (and the rest of the world) knows you consider her an idiot.

To be fair, Lawrence isn’t alone in that particular opinion.