While Oliver’s been recovering from his run-in with the archer six weeks ago, a new villain has arrived in Starling City and he’s playing with fire. 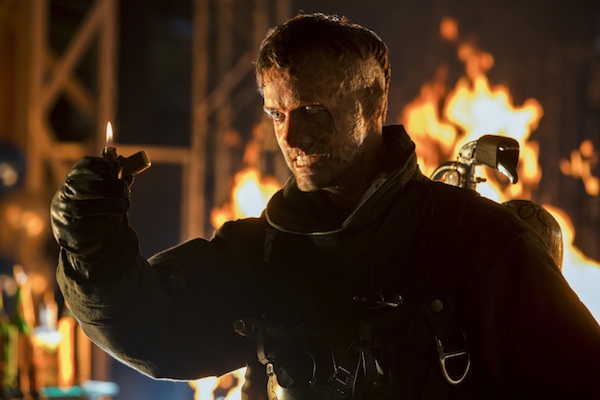 Arrow may have taken a break, but Starling City villains definitely haven’t. It’s been six weeks and Oliver (Stephen Amell) is still recovering from his last near-death experience, Walter is still missing (and this time it doesn’t look like it’s the husband-killing wife, Moira, to blame) and there’s a new bad guy in town who has a bit of an ax to grind.

Something to live for

Starling City’s hooded vigilante has been on hiatus and people are starting to notice, especially after a new bad guy emerges, dosing firefighters in turpentine. Dig (David Ramsey) is trying to push Oli to get back out there, but our hero is finally starting to learn a few things about family. He doesn’t care much if he dies, but he couldn’t do that to his family… again, especially with this whole Walter mess. Through Dig’s exceptional words of wisdom, Oliver realizes this means he finally has something to live for. So he isn’t interested in playing hero.

Laurel and Arrow… and Tommy

It’s not surprising, however, that it’s Laurel (Katie Cassidy) who’s finally able to convince Arrow to get involved. She reaches out and asks him to track down this murderous pyro. Although she’s kind of playing the hypocrite by asking one killer to find another, Oliver is encouraged that she sees him as “the good guy.”

He shouldn’t get too happy about it, though. Laurel is still with Tommy and it’s probably for the best. Tommy is shaping up to be, well, a functional adult. After his daddy cut him off, he’s busy working as the manager for Oliver’s club and is rocking it. He’s not the same guy. And Laurel isn’t pining over Oliver every minute anymore. I’m rooting for them. For now at least.

Tommy decided to throw a fundraiser for the firefighters and that’s when Oliver comes face-to-face with the city’s latest villain. Firefly is a brutally burned ex-fireman who was left for dead in a burning tower by his unit years ago. He’s come back to seek revenge on the men who left him behind.

When Firefly shows up at the fundraiser, Oliver escapes to his underground lair and transforms into Arrow. You can almost hear the crowd cheering when he arrives on the scene with his green hood and arrows. Of course, Oliver just wants to help Firefly since his vendetta is more personal and he’s not one of the corrupt guys on his list. But now that he’s had his revenge, the wounded fireman only wants to die. In a shocking twist, he sets himself on fire. Ridiculously sad.

And with that, Arrow has become a crowd favorite and the people of Starling City are hoping to see a lot more of him. That will make Detective Lance’s job a lot more difficult, but it probably means Oli and Dig will be back to scratching names off their list next week.