After 20 years, River Phoenix’s final film, Dark Blood, will be seen in its North American debut at the Miami Film Festival in March. 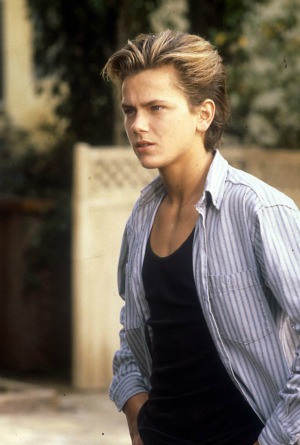 The challenges of finishing a film when a star dies are numerous. It’s why Brittany Murphy‘s last movie, Something Wicked, took an additional three years to complete. Now, River Phoenix‘s final onscreen appearance, Dark Blood, will make its North American debut at the Miami Film Festival in March.

The storyline follows a widower, played by Phoenix, who is living a hermit-like existence on a nuclear testing site in the desert. He is visited by a Hollywood couple when their car breaks down. Phoenix’s character imprisons the young couple because he believes he can start a new and better world with the young woman.

Dark Blood also stars Jonathan Pryce and Judy Davis and it was about 80 percent completed when Phoenix passed away of a drug overdose in 1993. The footage was put into storage in Utah and not thought about again until its Dutch director,George Sluizer, found out the insurance company planned to destroy the film in 1999.

It wasn’t until 2008, when Sluizer was diagnosed with an illness, that the director was inspired to finish the film. In a statement on Tuesday, he said, “It was a kind of urgency… You are a craftsman and you want to complete your work. I am a perfectionist. I wanted to finish ‘Dark Blood’ and I also wanted to preserve the cast and crew’s creative work.”

The movie was seen last fall at the Dutch Film Festival, but its appearance at the Miami Film Festival will mark the first time U.S. audiences will have a chance to see Phoenix up on the big screen again.

Miami Film Festival executive director Jaie Laplante said, “The tragic loss of River Phoenix’s outstanding talent is still profoundly felt 20 years later. We are proud that George Sluizer has honored Miami as the place to finally share his remarkable collaboration with Phoenix and the other great artists involved with ‘Dark Blood.'”

However, not everyone is excited about the film being released after 20 years. Phoenix’s family spoke with The Hollywood Reporter on Tuesday and firmly stated, “Despite George Sluizer’s claim that he has been communicating with River Phoenix’s family in regard to releasing River’s last film, Joaquin Phoenix and his family have not been in communication with the director nor will they participate in any way.”

17 mins ago
by Alyssa K. Davis