Are you a CSI, The Mentalist, or Elementary junkie? If so, Ripper Street just might be your next favorite show! 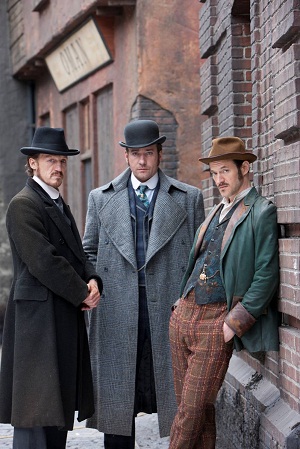 For roughly three years beginning in 1888, the large, impoverished city of Whitechapel, England was terrorized by at leaest one killer. The most famous and similar murders of Whitechapel prostitutes all happened, more-or-less, within a couple months. The murders became known as the “canonical five” and they were definitely believed to have been commited by Jack the Ripper… whomever he may have been. Aside from those five, at least six more murders took place, but since they weren’t as… methodical as the original five, there is still much debate as to whether those were commited by the same unknown suspect.

Ripper Street picks up just six months after the last of the canonical five women were killed.

H Division is in charge of covering one and a quarter square miles of East London. While the square footage is small, the population is large. Sixty-seven thousand Englanders are cramped inside those confines, most living in basic squalor. The men of H Division have tried for months to capture the man that has terrorized their beat. Yet nothing has turned up. Now (in 1889), more murders are occurring.

Less than a handful of men lead the investigation. There is Detective Inspector Edmund Reid (Matthew Macfadyen) and Detective Sergeant Bennett Drake (Jerome Flynn), who are members of H Division. They also rely on U.S. Army surgeon and former Pinkerton detective Captain Homer Jackson (Adam Rothenberg) to help with their investigations. Each man has his own share of secrets and scruples about their investigation. Each man is invested in his work for different reasons.

What will they find as they hunt for the man called Jack the Ripper? Who will stand in their way, how many lives will be lost as they continue to investigate and will Whitechapel ever be free from the Ripper’s reign of terror? For a sneak peek, watch this clip…

Ripper Street premieres Saturday, Jan. 19 on BBC America at 8/7c as part of it’s “Dramaville” programming. Lock your doors before you sit down for this.

Have you met the Doctor? (“Doctor Who?”)
Being Human comes to the US
Colin Morgan is Merlin