The ultra-private Jeremy Renner tried to keep the news under wraps, but loose lips sink ships. His ex-girlfriend is having his baby next month. 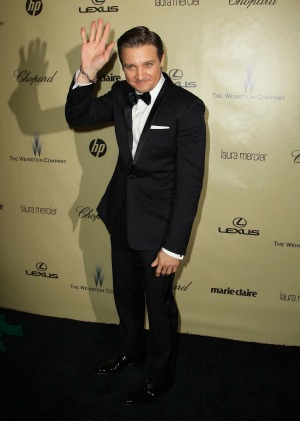 This has to be one of Hollywood’s best kept secrets because Us Weekly exclusively reported on Wednesday that Jeremy Renner is going to be a dad — and soon! The baby is due next month.

An insider overheard Renner talking with Eva Longoria at the Golden Globes last Sunday and leaked the big news to the entertainment magazine. Apparently, Renner told Longoria, “I’m going to fly in when her water breaks.”

Eva responded with, “I’m so blown away.” Us has confirmed with multiple sources that the news is indeed true. Their insider said, “They used to date but it wasn’t serious,” but his baby’s momma is living in his home in Los Angeles.

Who is the mystery woman? It was initially reported by media outlets to be actress Jess Macallan, whom the actor dated for four years after meeting at a film festival in Florida, but turns out she is married to someone else and definitely not pregnant. Their split came in 2010, after she decided to pursue a career in the entertainment industry. The Bourne Legacy actor has been publicly critical of Macallan in the past.

He told The Hollywood Reporter in an April 2012 interview, “I was going through The Hurt Locker campaign and she’s like, ‘Where do I get headshots?'”

Perhaps this news will silence all of the gay rumors that have plagued Renner since he burst onto the scene with The Hurt Locker. In the same April interview with THR, he said, “I want my personal life to be personal, and it’s not f***ing true.”

Renner gives birth to his next project, Hansel and Gretel Witch Hunters, on Jan. 25, just a few weeks before his first baby is born.