The Academy of Motion Picture Arts and Sciences is beaming up two Trekkies — Zoe Saldana and Chris Pine — to host their Sci-Tech Awards this year. 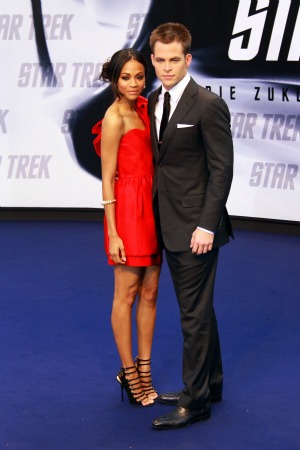 The Academy of Motion Picture Arts and Sciences must be big Star Trek fans because on Wednesday, they announced that Zoe Saldana and Chris Pine will host the Scientific and Technical Awards.

The Sci-Tech Awards are not as well known to the public as the official Academy Award presentation, but they are held two weeks before the Oscars. The show “honor[s] the men, women, and companies whose discoveries and innovation have contributed significant, outstanding and lasting ways to use motion pictures,” according to The Academy website.

This year, the show will be held at The Beverly Hills Hotel on Feb. 9, where nine awards will be handed out to 25 recipients.

Academy President Hawk Koch said in a statement, “We are thrilled to have Chris and Zoe host the Sci-Tech Awards. Their film experience with the kind of technical advancements these awards honor makes them the perfect pair for the job.”

The actors both starred in the 2009 reboot of Star Trek, with Pine taking on the James T. Kirk role and Saldana playing the iconic and sexy Uhura. They will both be reprising their roles this May in the sequel, Star Trek Into Darkness.

Viewers will be able to see portions of the Sci-Tech Awards broadcast during the Oscars ceremony on Feb. 24.

In years past, the Sci-Tech Awards have been hosted by Hollywood celebrities like Milla Jovovich, Jessica Biel, and Scarlett Johansson.

Read more on The Oscars

Oscar nominations: The snubs and surprises

Ben Affleck gets the last laugh