Loving your dog is one thing, but most dog owners don’t tweet constantly about their pets, bring them into the music studio, or have them attend a hospital birth. 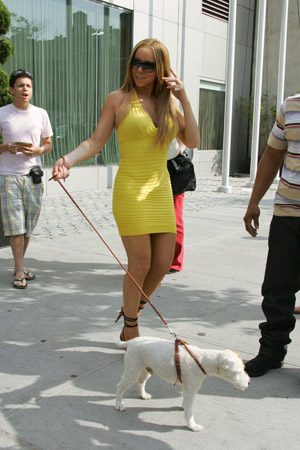 “Mariah Carey: A Diva Who Loves Her Dogs!” People cheerfully headlines a gallery of shots proving that Mariah Carey was an annoying dog-mom before she was a buyer of kajillion-dollar nurseries for twins Moroccan and Monroe, though her obsession seems to have cooled as of late.

Let’s start with the number of dogs, shall we? Five of them. Five. Five dogs small enough to carry in a purse, all Jack Russell terriers.

Has anyone informed Carey she’s a 42-year-old woman, by any chance? We wonder if she dots the i in her name with a little heart.

Anyhoo, having proved she’s still terribly twee in middle age with her dog names, Carey has been hauling around her dogs to inappropriate spots for years.

Jill E. also appeared in the music video Carey made in 2011 with Justin Bieber, “All I Want for Christmas Is You.” And Jill E. has appeared in assorted other tweets, including one in which she jumps for a strawberry in an elegant hotel room and one where Carey jogs with what she calls “dem pups.”

Carey also brought Jill E. Beans onstage during the September 2012 NFL Kickoff concert at NYC’s Rockefeller Plaza, and brought all five to the hospital when she gave birth to Roc and Roe, where they had their own room. Yes, a room specifically for the dogs.

But since having (actual) babies, Carey seems to have cooled on her dogs — she hasn’t tweeted anything about them in months, and the last time a dog picture appeared on her Instagram feed was October. And Carey’s been posting plenty of pictures, most notably a set from the star’s Australian holiday, during which Mariah and Nick Cannon found time to ride a miniature train, and um, dress up with the twins like Goldilocks and the three bears.

It’s like every other parent who has album after album of dog/cat pictures: once the baby’s born, the pet never shows up again.

44 mins ago
by Caroline Greelish