Murder, betrayal and breakups could be in store when dangerous secrets are revealed! 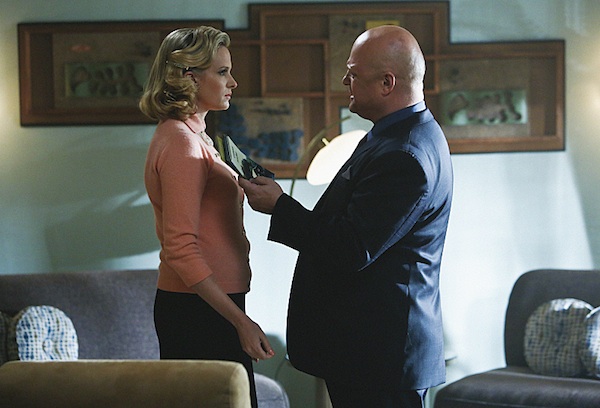 Jaw dropper: Ralph (Dennis Quaid) has an old flame! Aside from mildly flirting with Katherine (a relationship that’s crawling along like a sleepy sloth on muscle relaxers), he’s shown no interest in women. He’s still not over his deceased wife, which apparently was the problem with him and his ex, Barbara.

Barbara came around because her husband got mugged and wanted Ralph to look into the case, and she may have been hoping for a bit more. She’s clearly still crazy about Ralph and seems to toy with the idea of leaving her husband for him, but she knows she’d be left to live in the shadow of Ralph’s dead wife. Maybe that’s the problem between him and Katherine, too? It’s sad, but we’re holding out hope this guy will find a little romance again. The sooner the better, though. Seriously.

The other Lamb brother is having no trouble finding a little romance. Jack (Jason O’ Mara) just can’t pull himself away from the beautiful Mia (Sarah Jones), and feelings are getting pretty intense. When Mia tells her father that she and Jack are an item, Jack admits to the hot-headed gangster that he’s in love. That’s very sweet. He may have just ended his own life, but still, it was a very romantic love confession.

Remember when Laura lectured Vincent (Michael Chiklis) about not having secrets going forward? Guess she didn’t feel that deal worked both ways. Instead, she does the worst thing imaginable in the mob world (which we’ve learned from watching Mob Wives) and becomes a rat. The mob has a code: You don’t snitch. And if you do, well… if you’ve seen Donnie Brasco, you know you’re probably not gonna stay in one piece.

Vincent, obviously feeling betrayed, now also has to keep Rizzo from finding out and “taking care of her.” So he tells Rizzo Mia’s the rat, thinking he won’t hurt his own daughter. But then, Vincent says it was all Jack Lamb’s idea, so Rizzo heads out to get rid of Jack (like he needed another reason to kill him). Vincent tries to warn Jack, but Jack’s too busy consummating his relationship with Mia to answer his phone. Where are text messaging, voice mail, Facebook chat, email, Twitter and Skype when you need them?

We’re gonna have to wait until next week to see if Jack makes it out alive, but we do know that Savino’s marriage didn’t survive. Vincent sent Laura back to Chicago and told her she’d better not be around when he comes to visit the kids. Ouch. At least she’s still breathing.