Elton John, 65, and his partner David Furnish, 50, welcome baby Elijah into the world! If brother Zachary is any sign, Elijah’s going to be a cutie! 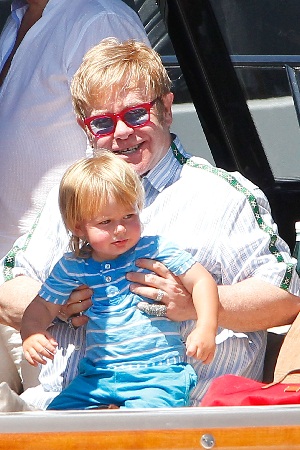 Elton John and his longtime partner David Furnish have announced the birth of their second son.

The lucky little boy, Elijah Joseph Daniel Furnish-John was born via surrogate on Friday and weighed in at 8 pounds, 4 ounces. We’re sure his equally overnamed big brother, Zachary Jackson Levon Furnish-John, is excited to have a new friend to play!

“Both of us have longed to have children, but the reality that we now have two sons is almost unbelievable,” the couple told Hello!

“The birth of our second son completes our family in a most precious and perfect way. It is difficult to fully express how we are feeling at this time; we are just overwhelmed with happiness and excitement.”

Elton John’s life was far from easy before he met Furnish, so we’re ecstatic that he’s finally been blessed with such a lovely little family. Just for fun, though, here’s how little Elijah’s life will compare to his father’s, who is 65 years old.

John will be 71 years old when Elijah starts kindergarten. When he graduates from high school, John will be 83 years old. The average age of the singers in 2013’s Grammy category Best New Artist is 26 years old. That means if Elijah were to follow in Big Papa Elton’s footsteps, John would likely be around 91 years old before he saw Elijah nominated for a Grammy. It could be even later if Elijah were to delve into a less popular genre of music and not earn much fame until later. Some genres have average ages closer to 40 or 50.

All teasing aside, we’re thrilled for John, Furnish, Zachary and Elijah. Elton and David are overflowing with love for their sons and you just know those boys are going to get everything they could ever need or want!

Welcome to life, Elijah. We’re certain yours will be fantastic.