If Hugh Jackman has any say in the matter, more movie-musicals are headed our way in the future! Post Les Miserables, the decorated actor has his sights set on bringing another song and dance number to the big screen. 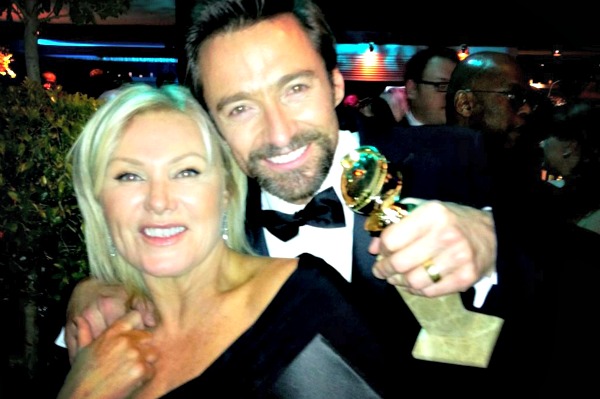 Hot off his Les Miserables win at the Golden Globes, Hugh Jackman is giving movie-musical fans hope for more magic to come — though perhaps it’s time to have a little more fun!

“I think I wanna do maybe a lighter one next time,” Hugh Jackman told E! News on Saturday when asked about the possibility of bringing other musical hits from the stage to the big-screen. “What about some dancing in the next one?”

As for what play he’d specifically like to do, Jackman said that 1950’s Guys and Dolls has caught his interest. “I wouldn’t mind doing Sky Masterson,” he said of the New York City gambler. “That would be fun.”

Not only fun, but a nice way to try and follow up Sunday night’s win in the Best Actor category. Surely, the man seen here hugging wife Deborra-Lee Furness is well aware Guys and Dolls originally ran for 1200 performances and won the Tony Award for Best Musical!

Hopefuls who’d love to see the idea come to life ought to consider sending a thank-you note out to the lady pictured above, “the greatest woman in the world,” according to the actor.

“I really thought I’d bitten off more than I could chew,” Hugh Jackman said of how his wife helped him complete his Les Miserables role. “My wife talked me off that cliff, like she talks me most days.”

Addressing her from the podium, the 44-year-old added, “But baby, I’m going to say it now in front of the entire world: Thank you for always being right.”

How interested are you in seeing Hugh Jackman film more musicals?