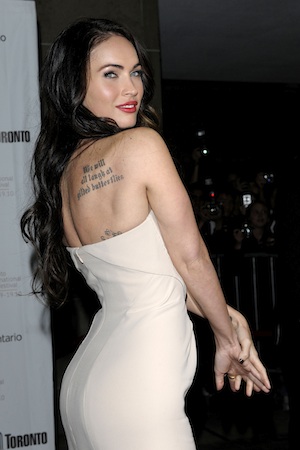 Megan Fox graces the February issue of Esquire magazine in a sexy, lacy bra and boy shorts — so much for just having a baby. Anyway, the interview is odd and shocking and weird because Megan Fox might either just be missing a PR rep to help her with the questions or she’s just super open. Either way, the interview with Fox in Esquire is truly a must-read.

Megan Fox on having a “vampire baby” >>

Megan Fox tells the magazine she realizes she’s very famous but hates the misconception that her life must be great — you know — because she’s so rich and famous and beautiful.

“I don’t think people understand,” says Fox, in reference to fame. “They all think we should shut the f*** up and stop complaining because you live in a big house or you drive a Bentley. So your life must be great. What people don’t realize is that fame, whatever your worst experience in high school, when you were being bullied by those ten kids in high school, fame is that, but on a global scale, where you’re bullied by millions of people constantly.”

This is a very understandable point: Fame does invite a lot of harsh and sometimes incorrect (and often mean) scrutiny thrown about our celebrity universe. However, we should point out that living in a big house and driving a $200,000 car (minimum) is pretty good in this economy.

Megan Fox also tells Esquire that she is very much aware men and women objectify her based on the sexually-charged roles she has taken in the past.

“I felt powerless in that image. I didn’t feel powerful. It ate every other part of my personality, not for me but for how people saw me, because there was nothing else to see or know.” (Esquire points out that Fox posed for them prior in sheer lingerie and heels and we should point out the current Megan Fox photos for the magazine certainly cater to Fox’s sex appeal). Fox continued, “That devalued me. Because I wasn’t anything. I was an image. I was a picture. I was a pose.”

Fox also reveals she feels Lindsay Lohan is in trouble and removed her Marilyn Monroe tattoo because she was worried about the negative energy it would bring to her acting career.

Says Fox, “She wasn’t powerful at the time. She was sort of like Lindsay [Lohan]. She was an actress who wasn’t reliable, who almost wasn’t insurable… She had all the potential in the world, and it was squandered.”

Megan Fox needs either a nanny or a divorce >>

One of our favorite parts of Megan Fox’s Esquire interview was her admission of deep religious ties and dedication to her Pentecostal church in Tennessee. Fox says she has received God’s gift of speaking in tongues before her congregation.

“It feels like a lot of energy coming through the top of your head — I’m going to sound like such a lunatic — and then your whole body is filled with this electric current. And you just start speaking, but you’re not thinking because you have no idea what you’re saying. Words are coming out of your moth, and you can’t control it.”

Megan Fox tells Esquire, “The idea is that it’s a language only God understands. It’s the language that’s spoken in heaven. It’s called ‘getting the Holy Ghost.”

You can read the full interview with Megan Fox in Esquire magazine when it hits newsstands Jan. 22, 2013.