Lindsay Lohan spent another day in court as questions arise over who is legally representing her and whether she’s headed to jail… again. 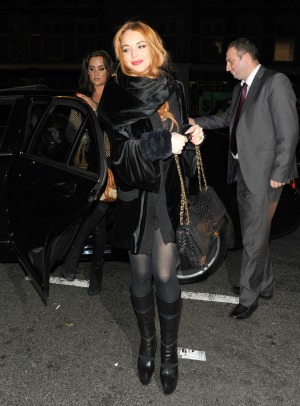 Another day, another Lindsay Lohan story. This time the tale is about Lohan pleading “not guilty” during her latest court battle in Los Angeles on Tuesday.

The charges she faces in this case include reckless driving, lying to police and obstructing police from performing their duties. The case goes back to a June incident when she slammed her Porsche into a truck on the Pacific Coast Highway in Los Angeles.

In other words, she’s in deep trouble. The starlet has 245 days of jail time ahead of her if the court decides she violated her probation. It is also her 20th appearance in court over the last six years.

To make matters worse, she fired her longtime lawyer and confidante, Shawn Chapman Holley. TMZ broke the news on Monday, but oddly enough, it was Holley who was representing Lohan in the courtroom on Tuesday.

She submitted Mark Heller as her representing attorney even though he isn’t even licensed to practice law in the state of California. He practices law in New York.

So, it was Holley who was in court today and a very confused judge even asked who was representing the troubled actress.

According to TMZ, the California lawyer responded with, “The representation issue will be nailed down.”

So it’s unclear who will be by Lohan’s side when her pretrial date begins on Jan. 30, but it was rumored that Holley was working out a plea deal that involved six months of lockdown rehab versus jail time.

We think that’s a better option, Lindsay. Stick with your lawyer and the plea deal.