Nicki Minaj wants fans to know she is not a psycho, and that her feud with Mariah Carey is not quite as unprovoked as the “Butterfly” diva would have the public believe. 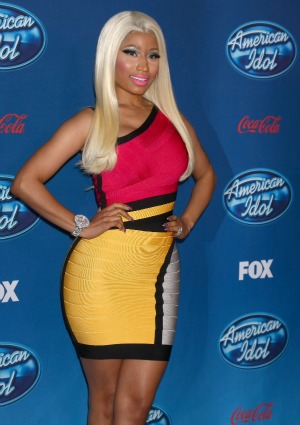 Nicki Minaj claims to be over her feud with fellow American Idol judge Mariah Carey, but in an interview with Ellen DeGeneres she sounds more passive-aggressive about it than anything else.

The “Starships” rapper tried to explain that she’s not a “crazy psycho” and that she’s totally over the silly feud that saw her allegedly threaten Carey, but in her attempt kinda proved that she is crazy and is not actually over it.

Minaj explained to Ellen that the whole thing started because peeps were telling her that her pal Mariah was miffed she was chosen for the American Idol judge’s panel.

“…I guess before I went in there I heard all the stuff that was being said but I didn’t believe it,” Minaj explained. “I heard them saying Mariah doesn’t want you on the panel but I was like, no. I am friends with Mariah.”

“I was like arguing people down. Like, don’t believe everything you read, you’re crazy. I went there and I started to feel a bit of the shade. And I just kind of over-compensated by being crazier…”

“If you know someone maybe doesn’t like you, it’s kind of like, now you’re gonna like really go in and show hey, because it’s like a defense mechanism. You know what I mean? It’s really that. Your feelings are hurt and you can’t believe it so you kind of just compensate with being crazy.”

However, Minaj insists that the feud is now over, despite the fact that she drove Carey to hire extra security in the wake of alleged threats to shoot her.

“We’re fine. I cannot hold a grudge against Mariah Carey. I don’t know if she’s gotten over it but I have,” Minaj said. “I mean, I’m over there cracking up laughing, having fun and if she’s still holding a grudge, I don’t know. Like, I don’t care.”

“I am not really a crazy psycho, you guys,” she insisted.

We’ll see how much of a crazy psycho Minaj may or may not be when the new season of American Idol kicks off Jan. 16.