Russell Crowe is known to be a fan of Dita Von Teese, the burlesque queen and Marilyn Manson’s ex. Are the pair hooked up behind the scenes? 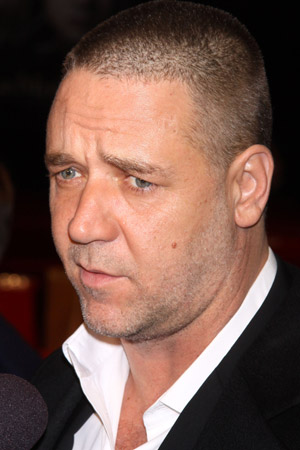 Russell Crowe just announced his separation from his wife back in October, but a hotel sighting has gossip-watchers wondering if he’s already found himself a new girlfriend — ultra-hot burlesque queen (and Marilyn Manson’s ex) Dita Von Teese.

The Les Misérables star, 48, was spotted enjoying a couples massage with Von Teese, 40, according to the New York Post.

The couple booked a 6:30 p.m. spa session at the Four Seasons Hotel in Manhattan in December.

Crowe has also been apparently following Von Teese’s Twitter feed and retweeting a few of her tweets, including, “Giving airport security a lesson in garter belts this morning” and “Dressage. Was measured for bespoke blk patent boots w/my name stamped on the heel…But under whose bed did I leave my Hermes riding crop?”

Russell Crowe changes his mind, wants his wife back >>

However, Crowe responded to the rumors on Twitter, tweeting “@DitaVonTeese is brave, smart, sweet and elegant. She is a friend of mine. Who wouldn’t want friends like that? Friends, not lovers” reports quote him as writing.

Crowe himself tweeted in December that “my priority is to try and bring my family back together,” and has been tweeting reports that he’s with his kids in Australia now (which is supposedly why he missed the Golden Globes on Sunday).

He tweeted about “taking the kids for pizza” on Sunday after a long bike ride, and today showed 6-year-old Tennyson some shots from Les Misérables, but “at 6, too young to watch it all, but he was chuffed.”