Lance Armstrong apologizes to his Livestrong staff just before leaving to tape his much-hyped interview with Oprah Winfrey. 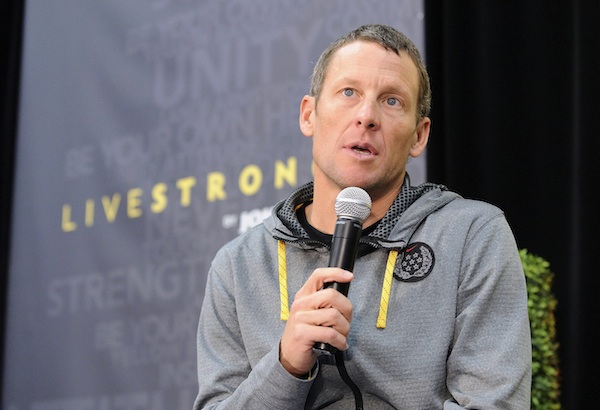 All new details: The Oprah interview with Lance Armstrong >>

Lance Armstrong gave strong hints to the press that his Oprah interview could be a blatant confession of guilt. The AP spoke with Armstrong outside his home in Austin, Texas, and stated Lance’s demeanor was calm and at ease and said Armstrong told the AP he was “ready to speak candidly” about the drug allegations with Oprah Winfrey.

A Livestrong publicist confirmed Lance Armstrong apologized to the staff on Monday during an emotional day for both Armstrong and his supporters. The AP writes, “Armstrong addressed the staff Monday and said, ‘I’m sorry.’ [A person with knowledge of what happened] said the disgraced cyclist choked up and several employees cried during the session. The person also said Armstrong apologized for letting the staff down and putting Livestrong at risk, but he did not make a direct confession to the group about using banned drugs. He said he would try to restore the foundation’s reputation.”

USA Today reported Livestrong spokesperson Katherine McLane told the national paper it was a “very sincere and heartfelt apology to the staff.”

Lance Armstrong rose to international fame with his record-breaking Tour de France wins, which he won seven times, back-to-back, between 1999 and 2005. Armstrong was diagnosed with advanced testicular cancer in 1996 and founded the Lance Armstrong Foundation, now known as Livestrong, in 1997. He became an A-list celebrity and source of motivation for millions of people with his intense dedication and commitment to his athletic career.

Armstrong faced doping allegations from teammates and opponents for several years, notably dating back to the 1998 Tour de France. Given Armstrong’s clean drug tests the accusations never seemed to gain much credibility with the American public. However, in May 2011 former U.S. Postal Service teammate Tyler Hamilton told CBS News he witnessed Lance Armstrong inject Erythropoietin (EPO). EPO is an illegal, performance-enhancing drug used to boost endurance by increasing the production of red blood cells. Hamilton stated he witnessed — and participated with Armstrong — in doping beginning back in 1999 and throughout Armstrong’s career. Hamilton stated it was a common occurrence for the U.S. team to use banned substances.

The United States Anti-Doping Agency (USADA) launched a federal investigation into Armstrong in 2010, and in 2012 a federal judge sided with the USADA’s charge that Armstrong used banned substances during competition. Lance Armstrong maintained his innocence, denying the claims, but did not appeal the USADA decision. As a result, Armstrong forfeited all prize money and titles earned after Aug. 1, 1998.

You can watch an ABC News report on Armstrong’s expected Oprah confession below: