You know those intriguing previews for NBC’s new show, Do No Harm? We’ve seen the show and we approve. Plus: You can see it, too. 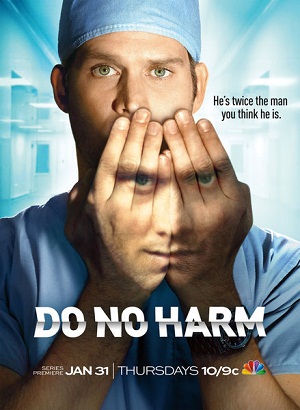 Those Do No Harm previews have seemed pretty interesting, right? The hot guy with the fat bank account and the kind smile… or was that a mischievous smirk? Do No Harm is just another example of television’s continuing trend of making everything old new again. But boy, has this old story earned a sexy spin.

Playing off the tale of Dr. Jekyll and Mr. Hyde, Do No Harm follows the daily life of Dr. Jason Cole (Jason Pasquale) and the nightly life of Ian Price, the monster that takes over Jason’s mind and body every night at 8:25. Dr. Cole is a brilliant brain surgeon. He spends his days doing remarkable procedures. Ian Price is… well, so far he just seems like a slightly unhinged party animal. Here’s the thing, though: They’re kind of both incredibly lovable.

You can watch the pilot now, on NBC’s YouTube channel. Or you can tune in for the premiere on Jan. 31 at 10/9c.

Jason spent five years harnessing Ian with a super-strong sleeping agent that knocks him out just before Ian reappears each evening. During the first episode, though, we learn that Ian has built up a tolerance to the drug. After two nights of Ian partying hard and using his devilish ways to ruin Jason’s life, Jason uses Ian’s bad-boy ways to help one patient, and then tricks him into getting himself knocked out in the O.R.

Aside from the very-nice-to-look-at Jason Pasquale, Do No Harm offers a few more viewing incentives. First is the lovely Phylicia Rashad (The Cosby Show), who plays Jason’s boss. Jason’s rival, Dr. Jordan, is seriously annoying. But when he comes into contact with Ian, it makes for such a funny scene. We definitely hope that happens again. Finally, when Ian shows up at the home of Jason’s old flame, he comes in contact with an adorable little boy named Cole. Uh-oh. The last line of the pilot is a few words of advice from Ian to young Cole when he comes outside to retrieve his lost monkey.

“Be careful,” he tells the little one. “Monkeys have been known to eat their young.”

More of what’s on television