Ann Romney on DWTS: Producers can’t reach a deal with Mitt Romney’s wife for Season 16 of Dancing with the Stars. 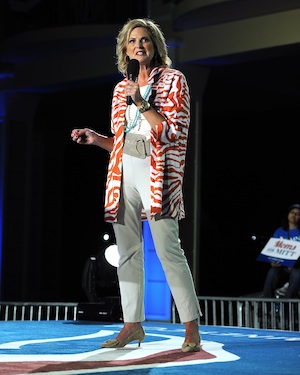 Dancing with the Stars (DWTS) returns for Season 16 on March 18, 2013. Producers have yet to finalize DWTS‘ Season 16 cast, but you’ll be surprised who producers put on the short list: Ann Romney. Yes, Ann Romney on DWTS. Sources for TMZ say Ann Romney was “very interested” in appearing as a contestant on the wildly popular celebrity dance show. (Note: We use the term “celebrity” here in the lightest way possible).

Unfortunately, Ann Romney rejected the offer to appear on Season 16 of DWTS. Said TMZ, “Sources connected to the show tell us… ‘DWTS‘ honchos approached Ann about the gig just after her hubby lost the election and she was ‘very interested.’ You may recall, Ann showed up at last season’s finale and gushed that she was a big, big, fan.” TMZ goes on to report that money might have been an issue since producers could not come to an agreement with Ann Romney for her DWTS deal.

It’s not clear why Ann Romney declined to appear on DWTS in March 2013, but the language TMZ used makes it seem as though the deal breaker could have been financial compensation for Ann. It sounds odd, given Mitt Romney‘s estimated $250 million net worth, but we couldn’t think of another reason for her decline. Since Ann’s a “big, big fan” of DWTS, what’s keeping her from saying yes?

We admit we’re bummed; watching Ann Romney on DWTS would have been a lot of fun.