Sportswriter Josh Rowntree ignited a new internet meme when he tweeted a pic of Tommy Lee Jones’ unamused expression at the Golden Globes side-by-side with meme icon Grumpy Cat. No surprise to anyone who’s ever read or seen a Tommy Lee Jones interview. 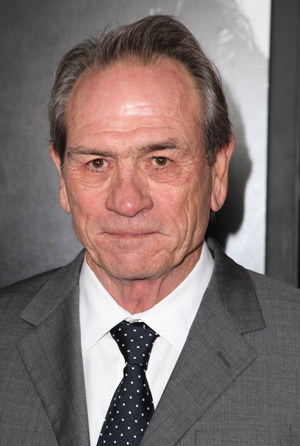 “Tommy Lee Jones is Grumpy Cat!” sportswriter Josh Rowntree wrote on Twitter after the Golden Globes cameras captured Jones obviously not laughing at presenters Will Ferrell and Kristin Wiig, with a photo comparison of Jones’ grouchy mug with that of Grumpy Cat, a frequently used image online.

The apt comparison is priceless (and has been retweeted dozens of times), but everyone already knew Tommy Lee Jones is one of the most irascible, least warm and patient celebs out there, at least when it comes to interviews.

The Onion’s AV Club named Jones as one of its “17 notoriously prickly interview subjects” in 2011, along with such cheerful fellas as Bob Dylan, Harrison Ford, Marlon Brando and Gene Simmons (who, you will recall, famously told NPR’s Teri Gross she should be welcoming him with “open legs” and then walked out of the interview).

The Onion called Jones a “dick” and said he “isn’t averse to giving a detailed response, particularly on a subject like the state of his cattle ranch,” but “makes little attempt to hide his contempt for interviews and those who conduct them.”

In an interview with YahooMovies on his performance in Lincoln, Jones was asked what he looked for in a director. “A paycheck.”

Entertainment Weekly called its Dec. 7, 2012 interview with TLJ “Who’s Afraid of Tommy Lee Jones?” and opened it thusly: “Tommy Lee Jones is in a good mood. So I’ve been told. But you can’t tell by looking at him.”

EW also said “his reputation for being one of the most fearsome men in Hollywood is well earned. We shake hands. There is no small talk. Once you’ve met Jones, you know better than to make any.”

When asked by Vulture a few years ago to describe the movie he was currently starring in, Men in Black III, Jones said he didn’t “really know what the plotline” was as “vast pieces of the script” were “yet unwritten.” The hapless Vulture writer asked Jones to describe his sense of humor.

Jones grated out, “I don’t think I would describe my sense of humor. Doesn’t sound like the kind of thing I’d do.”