Jodie Foster sorta-kinda came out and maybe-kinda retired from acting when accepting her Cecil B. DeMille Lifetime Achievement Award at the Golden Globes on Sunday night. Celebs react to the strange yet moving speech. 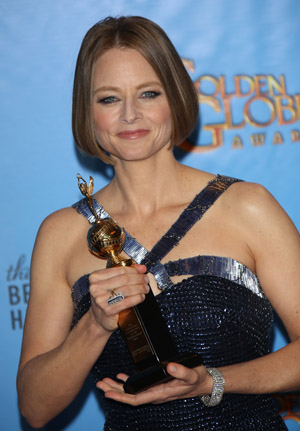 Celebrities must have gotten what Jodie Foster was saying better than we did — they took to Twitter to praise the 50-year-old actress and her nearly seven-minute Golden Globes speech while accepting the Lifetime Achievement Award.

Ricky Martin tweeted, “Jody [sic] Foster On your terms. Its your time! Not before nor after. Its when it feels right.” Ryan Murphy enthused, “I love Jodie Foster so much,” while Jesse Tyler Ferguson tweeted “Jodie Foster. You are perfection. I love you.”

But Foster love wasn’t just for the non-heteros.

Chelsea Clinton wrote, “Thank you #JodieFoster for sharing your grace & grit over 47 years, and most of all tonight #AnExample #GoldenGlobes.”

Though Clinton’s dad Bill was also on the Globes, she had no response to that.

Jodie Foster’s Golden Globes speech: What was that? >>

Marlee Matlin wrote that “Jodie Foster at the #GoldenGlobes. Pure Jodie, rightfully defending her privacy with brains and a smile. She is pure class.”

Lena Dunham, a big GG winner for the night, tweeted that “The highlights of my evening (aside from the obvious) were Bill Clinton and Jodie Foster.”

Serial Twitter ranter Bret Easton Ellis was perhaps the only celeb naysayer of note, complaining, “Jodie Foster’s speech: doesn’t really come out, brags about being 50, kills off her mother, celebrated by the LGBT community for coming out…”

Maybe Amy Poehler, the co-host of the Golden Globes with Tina Fey, had the best response. As she signed off for the night, she promised, “We’re going home with Jodie Foster.”