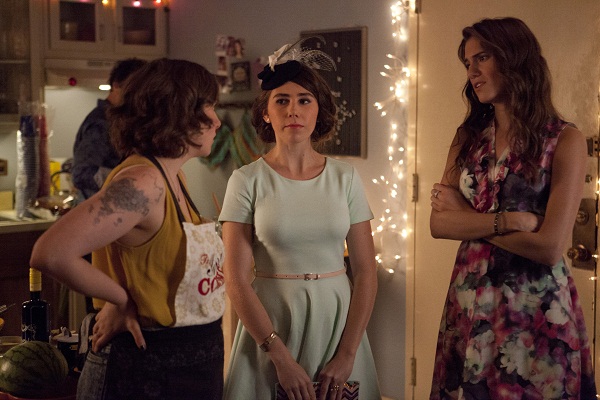 It’s fitting that on the same night Girls cleaned up at the 70th Golden Globes Awards (Best Actress in a TV Series and Best TV Comedy), its second season rattled off a sterling debut.

We last saw Hannah (Lena Dunham) woofing down cake on a Coney Island beach. Our first glimpse of her in 2013 is in an equally unflattering view, wrapped in someone other than Adam’s arms.

The opening scene is a nifty, little trick by Dunham, whose directorial skills greatly improved over the course of the first season. She trusts we remember how Hannah struggled mightily with Adam’s avalanching admission of love that ultimately drove her to that soul-searching moment with cake on the beach.

Girls, which breathed fresh air into the TV world last year and set the world record for gratuitous nudity in a comedy, picks up right where it left off as we see Hannah, topless, and in the middle of the deed.

It must be Adam, this time, right? Negative. It’s some random dude we’ve never seen before.

The bold move to begin with a diversion is optimistically a harbinger of growth and maturity, in not only Dunham’s career, but the show itself. Girls displayed so much promise in Season 1 that it’d be a shame to see it regress in its second year. Good for Dunham beginning with a bang (figuratively and literally). 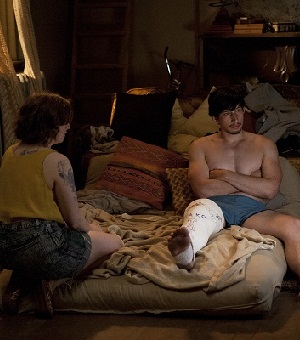 Not much time has passed between Season 1 and Season 2. We know that because soon after learning Hannah’s fooling around with a new beau, we find Adam (Adam Driver) laid up in bed and struggling with the effects of being hit by a truck (a full leg cast).

Hannah now assists his daily needs, and she’s become quite adroit with a bedpan.

It’s clear from the conversation Hannah has with her new squeeze in a bookstore that things with Adam have gone awry. She wants to tell Adam things aren’t working out — that she’s done, moved on, tired of cleaning up his piss. But with Hannah things are never that simple.

On one hand, it seems like the same old Hannah — stuck in a bleak situation at the mercy of Adam. But things are a bit different with her new man on the sly. Hannah’s completely in charge of her covert affair: No late-night visits, no social appearances, and certainly no mention of the word “love.”

It’s refreshing to see Hannah exercise a firm grasp on a romantic situation. We suffered with her through the turbulent courtship of Adam. It’s about damn time she started to realize just how wacko that dude really is.

By the end of the season premiere, Hannah finally gets the last word and breaks things off (at least for now) with Adam, who’s left hobbling to the couch on one leg. The imagery is poignant. Her strength versus his weakness represents a major power shift in the show.

Or maybe she’ll violate her own rule and show up at the door of her new boy toy in the middle of the night.

We know that by the end of the episode Hannah is still Hannah, but what about the rest of the gang?

Marnie (Allison Williams) is near rock bottom. She fights with her mom, misses Hannah, gets fired from her job at the art gallery, and hasn’t had sex in a long, long time.

When Hannah and Elijah (Andrew Rannells) host a housewarming party, we see Marnie at her worst as she struggles when seeing her ex, Charlie (Christopher Abbott), argue with his b****y girlfriend. 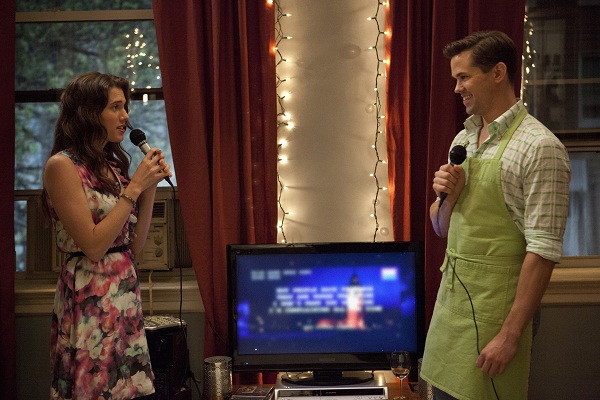 Marnie’s so despondent that by the end of the party, she’s half-naked and opening up for business with… Elijah? Sure they made out once in college, but Marnie quickly finds out that gay men don’t exactly make the best slump busters. The post-party couch hookup is arguably the best scene in the entire premiere. Williams and Rannells deserve a lot of credit for pulling off a strangely funny, yet deeply emotional scene. 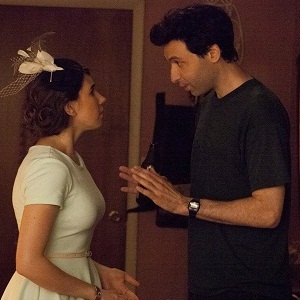 Shoshanna (Zosia Mamet), meanwhile, is fairing a little better than Marnie. We find her for the first time in Season 2 in her bedroom and performing some sort of deflowering ritual. Who can forget Shosh’s First Time with Ray at the end of last season? The experience seems to have left Shoshanna bitter as she avoids Ray (Alex Karpovsky) for most of Hannah’s party. Eventually they kiss, make up, and presumably go for Round 2.

Jessa (Jemima Kirke) is the only member of the group we don’t see much of. We catch a small glimpse of her, fresh off the honeymoon and cutting the line for a cab at the airport with her husband. Jessa’s shotgun marriage to Thomas-John (Chris O’Dowd) still makes absolutely no sense, and her lack of screen time is a trend that hopefully continues throughout Season 2.