Edith’s wedding is less fun for the residents downstairs. There are rugs that must be rolled up, shirts to be cleaned and ironed, and flowers to arrange. While the Crawley sisters focus on the swooning and preening, the servants of Downton have a whole wedding to put on. 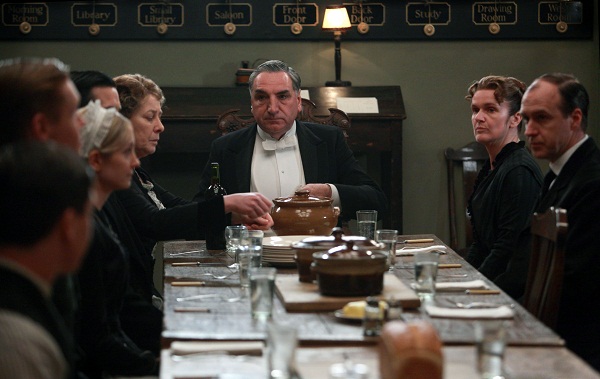 As the servants are preparing for the wedding of Lady Edith and Sir Anthony, they’re also dealing with Mrs. Hughes’ cancer scare. After finding a lump, Mrs. Hughes and Mrs. Patmore go into town to visit the doctor. The first test was inconclusive and now Mrs. Hughes is being forced to wait while they run a more thorough test (which back then took months). As the women discuss Mrs. Hughes’ problem, Carson overhears them. When Carson confronts Mrs. Patmore, she lets the cat out of the bag that it is probably cancer. 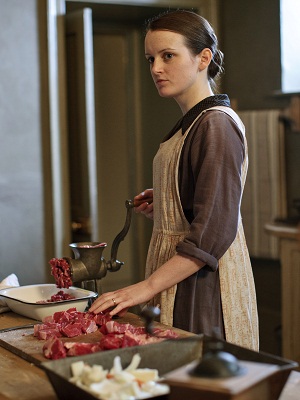 Carson eventually brings Mrs. Hughes’ sickness to Lady Grantham’s attention. Despite the lady’s impending move and bad financial times, she tells Mrs. Hughes that no matter how sick she gets, she’s welcome to stay with the Crawley family and even says she’ll hire a nurse. Those upstairs people really do love their servants downstairs!

There’s also an issue with Ms. O’Brien. Tom tells Mosley that O’Brien is planning to leave Downton and Mosley talks to Lady Grantham about a friend of his who could use the job. Except Lady Grantham knows nothing of Ms. O’Brien’s plans to leave and asks Carson (who also has no idea) for an update.

At the servants’ dinner, Carson asks Mosley what he’s on about and Ms. O’Brien becomes enraged. She had no plans to leave. While the rest of the staff are annoyed with Mosley and begin to ignore him, Mosley tells O’Brien where his faulty information came from and O’Brien forgives him… but not without promising revenge on Tom. Eek!

After the almost-wedding of Lady Edith, even the servants are remorseful. Despite minor tensions, the people downstairs truly love the family that flutters above them. Even as they make stabbing remarks back and forth toward one another, they’re all quite saddened by poor Edith’s bad luck in love and seem worried about her. Carson even agrees to let the group make disparaging remarks about Sir Anthony. 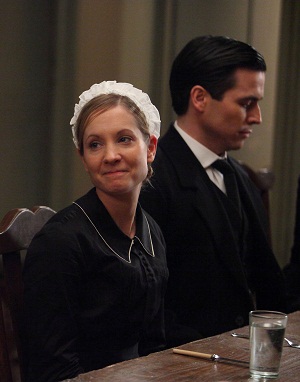 There’s some other minor drama, too. First, the new Mrs. Bates continues to work toward clearing Mr. Bates’ name. She still believes there’s no way Mr. Bates could have killed his first wife.

Then there’s Ethel Parks, who turns up to visit Mrs. Crawley at the women’s center, again. She chickens out yet again, too, and forces Mrs. Crawley to head to Downton to speak with Mrs. Hughes and try to get contact information for the woman. When she turns up at Edith’s home, though, Edith still won’t tell her the problem. Will we ever find out her deal?

The most stressful event downstairs happened in the last few minutes. When Mrs. Hughes and Mrs. Patmore returned from the doctor, Hughes sent Patmore to tell Carson that Mrs. Hughes was just fine and doesn’t have cancer. It’s a story even Mrs. Patmore seems to believe. Something about the secret look on Hughes’ face, though, seems to suggest otherwise.

Is Mrs. Hughes really healthy or is it all just a ruse to calm down her friends downstairs and up?

Don’t forget to check in upstairs, too! >>

19 mins ago
by Daisy Maldonado