Awards shows are typically full of lame one-liners and jokes that fall flat with the audience. Not the 2013 Golden Globes: The show was full of genuinely funny moments that kept us laughing through the three-hour telecast. 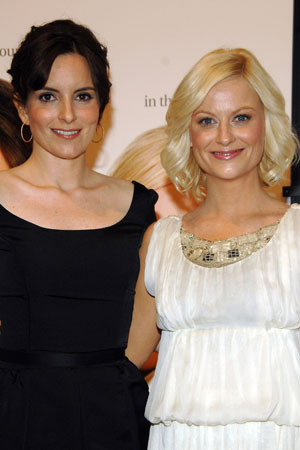 We picked a few of our favorite funny moments of the night. Naturally, most of them came courtesy of hosts Amy Poehler and Tina Fey.

“Harvey Weinstein, thank you for killing whoever you had to kill to get me here.” — Jennifer Lawrence, while accepting her award for Best Actress in a Musical or Comedy.

“This is Dior Haute Couture. I don’t really know what haute means, but I had to say it.” — Lawrence describing her dress to Ryan Seacrest on the red carpet.

“When it comes to torture, I trust the lady who spent three years married to James Cameron.” — Poehler, referring to Zero Dark Thirty director Kathryn Bigelow.

“I haven’t seen someone so totally alone and abandoned like that since you were on stage with James Franco at the Oscars.” — Fey to Anne Hathaway about her role as Fantine in Les Miserables.

“Quentin Tarantino is here — the star of all my sexual nightmares.” — Fey about the out-there Django Unchained director.

“I also promised myself if I ever got this chance I would thank Chad Lowe.” — Lena Dunham while accepting her award for Best Television Series — Comedy or Musical.

“And you know what, Taylor Swift. You stay away from Michael J Fox’s son!” — Fey to serial dater Swift.

“Glad we got you through middle school, Lena,” — Fey to Dunham. The Girls actress thanked the hosts for helping her get through tough times.

“I’m just gonna put it out there, you know? Loud and proud. So I’m gonna need your support on this. I am single.” — Jodie Foster while accepting the Cecil B Demille Lifetime Achievement Award.

See our red carpet interviews at SheKnows Goes to the Shows >>

What was the funniest moment of the 2013 Golden Globes?