Sugar skulls and sultry grayscale run rampant in this sensual music video with one of our favorite Latinas. 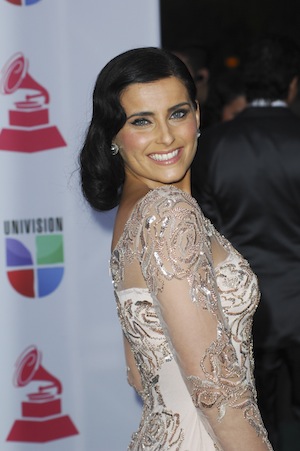 Needs no introduction, but…

Nelly Furtado has always been a whirlwind of talent plus originality (and sometimes oddity). When she first came onto the scene with “I’m Like a Bird,” I was sold on her vocal prowess, but when I saw her reappear for “Say It Right” with Timbaland my jaw almost hit the floor.

It seemed like almost overnight that this pretty, bubbly, abstract artist became a sex symbol. And in her latest video for “Waiting for the Night,” she’s nothing short of enchanting — and even a little dark.

In English, it directly translates to “Day of the Dead.” It’s a Mexican holiday dedicated to prayer and remembrance of those who have passed. Often it features images of women with painted skulls on half their face; some even get tattoos of these dual faces and can be referred to as “sugar skulls.” This video entrances you with the appearance of several women who are made up in a similar fashion. It’s quite remarkable to see this facet of culture produced by a songstress who is quite in tune with her roots.

Throughout this video the imagery is mysterious and incredible. I was glued to the screen when I first watched it, and you have to let me know if you thought the same! Nelly is just as beautiful as she was when we first saw her emerge, and her on-screen presence is fascinating. This alluring video is not one you want to miss!

The single is off her album The Spirit Indestructible. According to the Examiner, the video was directed by The Seed Collective.

What other videos do I think are worthy of your attention? Check out other editor’s picks: