While Tina Fey and Amy Poehler did an awesome job hosting the 70th Annual Golden Globes, there were a few presenters who stole the show as they presented Golden Globes. 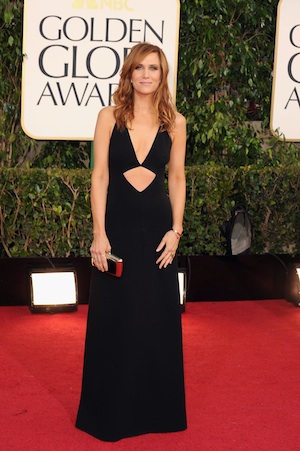 Did you tune in to watch the 70th Annual Golden Globes? The lively Hollywood party is one of our favorites to watch — as the night goes on the celebrities loosen up and well, they’re funny. We showcase the best presenters of the night at the 2013 Golden Globes.

Kisten Wiig and Will Ferrell

Kristen Wiig and Will Ferrell broke out in an improvised comedy routine as they read the nominee list for Best Performance by an Actress in a Comedy or Musical. Kristen and Will explained how they were required to watch each film to assess the actresses’ performances and went on to describe the movies — note: They clearly had not seen the films. What made the bit from Wiig and Ferrell amazing was their reactions as the nominee list was read with clips from the movies. Ferrell confessed “none of the clips looked familiar” as the audience roared in laughter. The Golden Globes camera panned to Tommy Lee Jones during the improvisational routine and he did not look happy. Lighten up, Jones, it’s a party!

The macho duo of Sylvester Stallone and Arnold Schwarzenegger presented the Golden Globe for Best Foreign Film and made fun of each other’s ability to speak English. We enjoyed the fact that these guys could make a self-deprecating joke and Stallone even remarked to Arnold, “No, I can’t be as bad as you. You are really bad. How long have you been here?”

Maybe we just don’t get to hear Sacha Baron Cohen‘s accent enough but his delivery was fantastic as he made snarky remarks about his Les Miserables castmates with a drink in hand. Cohen delivered the nominees for Best Animated Feature Film — Brave won.

Check out our red carpet interviews at SheKnows Goes to the Shows! >>