We thought Tina Fey and Amy Poehler did an amazing job hosting the 70th Annual Golden Globes. Here we discuss our favorite Fey and Poehler moments. 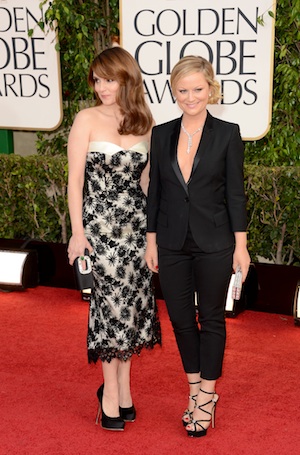 Tina Fey and Amy Poehler looked fabulous and made us laugh instantly with their jokes about celebrity prescription drug use and the “rat-faced people of television”. The duo shined and played off each other’s strengths. We loved the opening jokes about Ricky Gervais and how his offensive behavior irked the Hollywood Foreign Press Association so much they asked him to host the Golden Globes two more times.

Poehler outshone Fey a bit with her great one-liners, especially the joke about Kathryn Bigelow‘s deep “understanding of torture” thanks to her former marriage to James Cameron and her perfect Boston accent as she made fun of Ben Affleck.

Update: We now have the opening monologue for Tina Fey and Amy Poehler at the 2013 Golden Globes. Watch below if you want to laugh at all the celebrities of Hollywood.

One of our favorite moments was seeing Tina Fey dressed up as Johnny Depp. Fey even sat in for a nominee and threw off the presenters when the camera panned to Fey in Depp costume. Our only complaint is that we wish we could have seen more of Fey and Poehler at the 2013 Golden Globes. Much of the show time was award after award — which felt rushed — with presenters. One of the best moments was when the Golden Globe camera panned to Amy Poehler who was sitting on George Clooney‘s lap and appeared to be very intimately talking.

Tina Fey and Amy Poehler didn’t actually close the show, which was disappointing. We would have loved to see some humor at the very end. George Clooney closed the show as he read back-to-back awards: Best Motion Picture — Musical or Comedy (Les Miserablés) and Best Motion Picture — Drama (Argo).