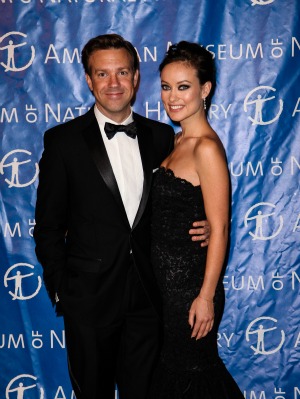 The year is only 12 days old but the new year has brought lots of baby bump news and of course, engagements. It’s time to add Jason Sudeikis and Olivia Wilde to that list.

People broke the news on Saturday that the Saturday Night Live actor proposed after the holidays. The engagement should come as no surprise to their fans, as the couple have talked openly about their relationship.

The 28-year-old actress has admitted to falling “blissfully, hopelessly, wildly in love” with Sudeikis. The two began dating in Nov. 2011 and they became inseparable almost immediately.

The engagement rumors have been trailing the couple all fall and Wilde even denied the engagement news back in December. She tweeted on Dec. 13, “No I’m not engaged but I AM at the Stones show and holy sh*t Ronnie Wood you got style, boy. It’s just a fact. Trying to score a shoe pic.”

While that might be an unusual denial, an engagement was clearly just around the corner for the duo.

There has been no wedding date set as of yet, but they both have a full slate of films ahead of them in 2013. Sudeikis has the animated film, Epic, coming in May and the highly anticipated We’re the Millers with Jennifer Aniston hitting the screens in August.

Wilde also has two films this year: The Incredible Burt Wonderstone, hitting the big screen in March and Rush, directed by Ron Howard, out in September.

This will be the second marriage for both actors. The SNL funnyman was married to Kay Cannon, a 30 Rock writer, for six years, while Wilde was married to Prince Tao Ruspoli for eight years. She infamously overshared at a Glamour event that during her first marriage, “I felt like my vagina died.”

Let’s hope that doesn’t happen in her second marriage to Sudeikis. We wish them the best in their new life together!

Olivia Wilde: Jason Sudeikis brought my vag back to life