If you are wondering who “rules the world”, the answer is Beyoncé: She’s set to launch a two-month media blitz that involves the presidential inauguration, the Super Bowl, and an HBO documentary. 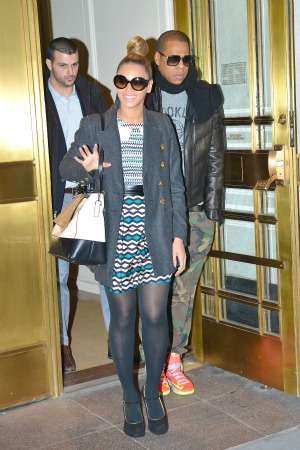 Over the next month, get ready for the all day, all night, all Beyoncé media blitz. The music diva is preparing to bombard the entertainment scene with music, appearances and her highly- anticipated HBO documentary.

Her time in the spotlight begins with the presidential inauguration on Jan. 21. Beyoncé is scheduled to sing the National Anthem at the U.S. Capitol for President Obama’s second term. She also sang at the president’s first inauguration at one of the celebratory balls with Etta James’ classic, “At Last.”

Her next big appearance will be the halftime show at the Super Bowl on Feb. 3. The “Crazy in Love” singer will not only sing her solo hits, but she will be joined by her Destiny’s Child bandmates, Kelly Rowland and Michelle Williams.

The group will not only sing a medley of their greatest hits, but they will also debut their first new song in eight years called “Nuclear.” Of course, the superstar doesn’t want to be upstaged by her former girl group, so she will also debut a track from her upcoming fifth studio album.

Are you exhausted yet? There is still more. The HBO documentary featuring — you guessed it — Beyoncé, will premiere on Feb. 16.

Life is But a Dream is being described by HBO as, “A portrait of Beyoncé strips away the veneer of stardom to display the extraordinary gifts.”

Part of the “extraordinary gifts” she will be sharing include her baby bump and sonogram. These will hopefully lay to rest the rumors that she faked her pregnancy and secretly used a surrogate.

A new teaser of the documentary was released on Friday and it shows the pressure and the chaos of living an over-the-top life. However, it’s good to remember that the 31-year-old directed and produced the film herself, so she controlled the shots on her personal life.

If that isn’t enough for Beyoncé fans they can always check out the latest GQ magazine, where Beyonce sports a sexy bikini bottom and tiny baby t-shirt top on the cover. Or, for glossy, glamorous shots of the superstar, check out her Tumblr account.

Hopefully, after the media blitz, Beyoncé will take a long nap with her hip-hop husband Jay-Z, so they don’t become too over-exposed. In the meantime, take a look at her new HBO teaser.