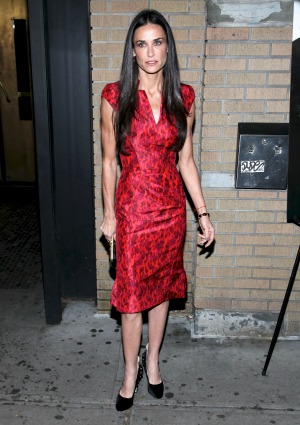 Demi Moore is keeping up with her cougar status after the 50-year-old was caught on a date with 31-year-old restauranteur Harry Morton. If Morton’s name sounds familiar, you are correct — he is best known for his 2006 romance with Lindsay Lohan.

A source told E! News that this isn’t a new romance; it’s actually been going on “for a few months.” They revealed, “They have been trying to keep it a secret. It’s not a serious thing… but it may develop into something. They have a lot of fun together and have been meeting in secret places in New York and Los Angeles.”

The couple was spotted by paparazzi on Wednesday night leaving the South Beverly Grill in Beverly Hills. Eyewitnesses reported to E! News that it was clearly a date and they were “flirtatious, laughing, and appearing to have a great time.”

That’s good news for Moore, who has had a hard time moving on from her soon-to-be ex, Ashton Kutcher. Kutcher filed for divorce in late December and he’s happily coupled up with Black Swan star Mila Kunis.

Moore has struggled to find her footing in the aftermath with an overdose, a stint in rehab and a series of younger men. Will Pink Taco and Viper Room owner be the magic elixir?

The E! News source seems to think it’s a step in the right direction. They said, “It’s no surprise that she would be attracted to him, as he’s a catch. They are just getting to know one another, [but Moore’s] in a really good place at the moment and is hopeful about the future.”

Now, let’s hope this news doesn’t send Lohan over the edge again. In 2009, Morton described his time with Lohan to Inked Magazine as, “the worst thing of all time… I’ll be happy if it never happens again.”

Perhaps his romance with Moore will be a little less crazy and a whole lot happier. Or according to TMZ, this supposed romance is nothing but two friends having dinner…”it’s strictly a platonic thing.”

We’re not sure who to believe right now, but can anyone keep up with Moore’s dating life these days, anyway?