Courtney Stodden is killing it in her Reality music video — that is, if ‘”it” is wearing next to nothing while wriggling about and lip-synching! Watch below. 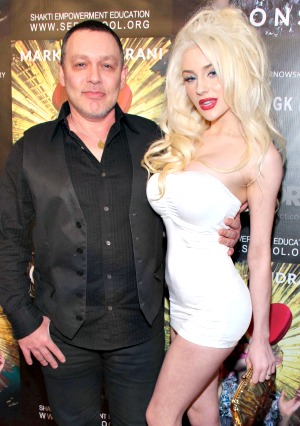 Courtney Stodden is pulling out all the tricks for her “Reality” music video. As seen in a behind-the scenes-look below, the 18-year-old wife of actor Doug Hutchison is puttinger her talents to work.

Wearing a see-through skirt and bikini top, the reality star lip-synchs for the camera with her hair parted into pigtails. In the background, the “Reality” video director can be heard encouraging her moves by saying, “More! Bigger!”

Courtney Stodden is looking a bit bigger (bustier?), these days, don’t you think? The “all natural” teen bride is pictured here looking unreal, ironically, on husband Dough Hutchison’s arm on Jan. 10. From high hair to a short, short white dress and towering heels, the young lady who’s a friend of PETA, went all out.

Writhing quota reached, he classed it up a notch by ordering, “Give her the sucker! Where’s the sucker?”

Describing the video concept, she recently shared, “There’s this nerd, he’s a ‘hot nerd,’ and I get captivated by him. Is it his fantasy, is it reality? I don’t know, you’ll have to wait and see!”

As for the outfit? She explained of the jellybean creation, “I am a walking piece of candy.”

Here, for your viewing torture, we present the making of Courtney Stodden’s music video. You can’t not watch!

What do you think of Courtney Stodden’s music video thus far?