Last Monday, Switched at Birth returned with all new episodes. This season, the drama will bravely go where no other mainstream show’s gone before: They’re producing an episode told from the perspective of one of its deaf characters. 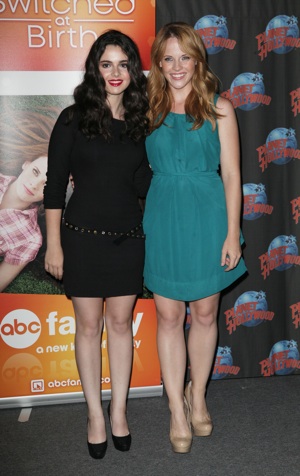 ABC Family’s Switched at Birth is taking it to another level. The revolutionary series plans on airing its first episode featuring all sign language. It will capitalize on the show’s premise, which centers on the blended family of two teenage girls — one hearing (Vanessa Marano), and the other, deaf (Katie Leclerc).

According to EW, the March 4 episode will feature nothing but American Sign Language (ASL). Don’t worry, open captions will be shown for hearing viewers.

Switched at Birth’s moms and daughters >>

Executive Producer Lizzy Weiss revealed, “I’ve been wanting to do an all-ASL episode since the series began, and the storyline we’ve been focusing on this season gave us the perfect opportunity.”

The storyline in question centers on Bay (Marano), who recently signed up for the Carlton School for the Deaf’s pilot program. It’s supposed to help hearing kids interact with their deaf family members.

Apparently, the school will be the setting for a heated debate, in which its students stage an uprising. “It’s an exciting, visual, empowering story of kids who are different fighting back, and it allows our audience to experience the world as our deaf characters do.” Weiss explains. “We’ve been building to this for 39 episodes and we’re all thrilled to be the first to try this.”

Switched at Birth just began its second season Jan. 7. It was the number one scripted cable TV telecast for females 12-34, and for adults 18-34 for the 8 o’ clock hour.

Switched at Birth airs Mondays at 8/7c on ABC Family.

Did you tune in for the season premiere?