Sad news: Britney Spears and Jason Trawick have ended their engagement, according to reports. 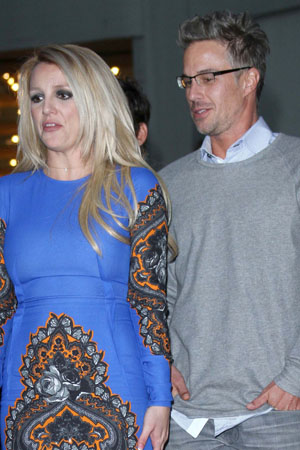 It’s been a busy week for Britney Spears. First, she announced that she’s leaving The X Factor after one season to focus on her own music. Oh, and she’s split from fiancé Jason Trawick, too.

According to TMZ, the pair — engaged since 2011 — just “grew apart” and ended things on friendly terms.

Her rep, Jeff Raymond, confirmed the news to People.

“Britney Spears and Jason Trawick have mutually agreed to end their one-year engagement,” he said. “As two mature adults, they came to the difficult decision to go their separate ways while continuing to remain friends.”

Spears and Trawick also the typical joint statement of “we’ll always love each other and blah, blah, blah.”

“Jason and I have decided to call off our engagement,” Spears said. “I’ll always adore him and we will remain great friends.”

“As this chapter ends for us a new one begins. I love and cherish her and her boys and we will be close forever,” Trawick added.

The pair didn’t want to tell the world until they went to court, according to TMZ.

“Jason didn’t want to make the announcement until he was taken off the conservatorship,” the entertainment website reported Friday afternoon. “Interestingly, lawyers for the conservatorship are in court right now, along with Britney’s dad, Jamie Spears, so it’s possible Jason will be removed today.”

The split isn’t entirely unexpected — unnamed sources have hinted at a breakup for weeks.

“Jason has told Britney’s entire family that he’s planning to leave her, so that Britney will have a support system when he breaks the bad news,” a source told Hollyscoop in December.

JT breakup was the beginning of Britney’s downward spiral >>

So, what will the 31-year-old superstar do now? She’s reportedly in talks to do a residency in Las Vegas — and there’s an album in the works.

“I’ve made the very difficult decision not to return for another season. I had an incredible time doing the show and I love the other judges and I am so proud of my teens, but it’s time for me to get back in the studio,” Spears said in a statement Friday. “Watching them all do their thing up on that stage every week made me miss performing so much! I can’t wait to get back out there and do what I love most.”