Ben Affleck got the last laugh at the Critics’ Choice Awards on Thursday when he thanked The Academy for his win. 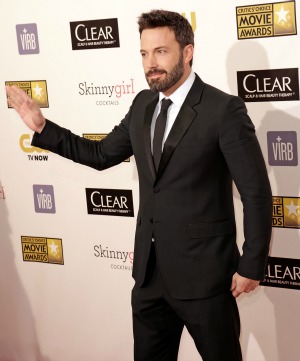 Even though Ben Affleck was snubbed during Thursday’s Oscars nominations by The Academy of Motion Picture Arts and Sciences, it looks like he got the last laugh. That same night, Affleck won a Critics’ Choice Award for Best Director for his film, Argo.

When he went up to accept his award, he took a humorous approach to the day’s events by saying, “I would like to thank the Academy. I’m kidding. I’m kidding! This is the one that counts.”

Of course, any artist would love to be nominated for an Academy Award, but Affleck already has one on his shelf for Best Original Screenplay for Good Will Hunting that he won in 1998 with pal Matt Damon.

The Argo director does realize how many strides he has taken in his career, though. In his speech, he noted, “There was a time where the Ben Affleck Critics’ Award was a Saturday Night Live sketch, so this is a very, very cool and exciting thing, particularly to me, because there are so many unbelievable directors in this category who I can only look up to, and so many who didn’t get nominated, and I’m really humbled by that. “

The 40-year-old clearly remembers his frat-boy image, followed by his “Bennifer” days, when he was dating Jennifer Lopez. During that period, his career tanked and his public image took a huge hit.

Affleck has bounced back big time as a director helming movies to critical acclaim, like Gone Baby Gone, Argo and The Town. Despite the Oscar snub, Hollywood has recognized his talents with a Golden Globe, SAG and Directors Guild nomination this season.

In fact, many actors are also chiming in about the Affleck omission. In a phone interview with The Today Show on Thursday, Bradley Cooper said, “I do have to say real quick, Ben Affleck got robbed.”

Oscar host Seth MacFarlane was also a bit surprised about Affleck being left off of the list. In a satellite interview on Live with Kelly and Michael he said, “He’s like the Matt Damon of directing.”

If you want a real shocker, how about Jennifer Garner‘s ex-husband, Scott Foley, weighing in on the issue? He tweeted, “Travesty and injustice? A bit dramatic. But Affleck getting overlooked for a best director nod is just plain silly. That’s right, silly.”

Regardless, Affleck could still win an Oscar on Feb. 24. He, along with co-producers George Clooney and Grant Heslov, are nominated in the Best Picture category.