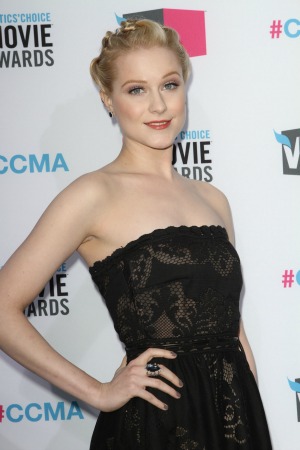 Newlyweds Evan Rachel Wood and her husband, Jamie Bell, are going all out in their first year of marriage. US Weekly broke the story on Friday that the couple is expecting a baby.

Later in the day, the actress confirmed the news by tweeting, “Remember when i said, ‘No baby on the way here. Well, I didn’t know there actually was!”

Her tweet included a photo of the classic pregnancy book What to Expect When You are Expecting.

Her followers sent messages of congratulations throughout the day and it was clear that the True Blood actress was touched by the outpouring of love. She responded with, “Thanks for all your warm wishes. We are very happy. I’m gonna be a mama!”

Wood and Bell began dating in 2005 after meeting on the set of Green Day’s music video for the song “Wake Me Up When September Ends.” That first pairing lasted about a year before they broke up, but they couldn’t stay away from each. They reunited in 2011, got engaged in the early part of 2012, and married on Oct. 30 in California.

The 25-year-old actress had been linked to some interesting celebrity men before she settled down and married 26-year-old Bell. In the past, she was engaged to shock rocker Marilyn Manson and she had a rumored affair with her Wrestler co-star Mickey Rourke. She has also openly identified herself as bisexual as late as November 2012.

Bell has definitely led a quieter life while pursuing his acting career. He is best remembered to movie-going audiences for the title role in Billy Elliot as well as parts in Flags of Our Fathers and Jane Eyre.

This will be the couple’s first child.