Quentin Tarantino has unleashed on reporter Krishnan Guru-Murthy. Watch below as the Django Unchained director blows up while refusing to discuss movie violence yet again. Temper tantrum or understandable frustration? You make the call. 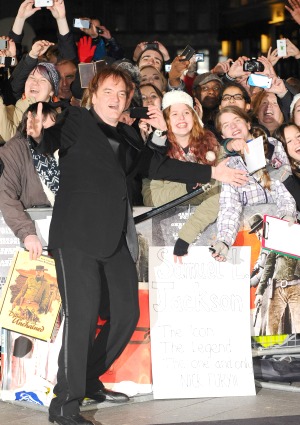 Quentin Tarantino will not be discussing any possible link between movie violence and real-life violence, thank you very much. Krishnan Guru-Murthy unfortunately had to learn the hard way that this particular topic was off-limits with the Django Unchained director.

During a recent sit-down between Quentin Tarantino and the reporter for Britain’s Channel 4, the mood went from just fine to very bad in a matter of moments.

“Don’t ask me a question like that,” Tarantino shot back at Guru-Murthy, after the reporter attempted to ask how the director feels so confident there is no link between enjoying movie violence and real violence. “I’m not biting. I refuse your question.”

“Why?” the reporter responded, only to be told sharply, “I’m not your slave and you’re not my master. You can’t make me dance to your tune. I’m not a monkey.”

After the reporter tried to re-route the question through comments actor Jamie Foxx had made previously, Quentin Tarantino sniped, “You should talk to Jamie Foxx about that. And I think he’s actually here, so you can.”

Refusing to explore his stance on violence, the 49-year-old, pictured above quite happy to see fans in London on Jan. 11, ranted:

What is Quentin Tarantino’s favorite show, hands down? >>

“It’s not my job to flesh it out,” Tarantino added to Guru-Murthy, who asserted it is simply his job to ask such questions. “I’m shutting your butt down. This is a commercial for my movie!”

Watch below as the bickering between Quentin Tarantino and the reporter carried on:

Do you think Quentin Tarantino’s stance was understandable, or out of line?