Beyoncé is not exactly known for being a down-to-earth star, but in a GQ interview about how dazzlingly fabulous she is, she unwittingly reveals her own astonishing narcissism. 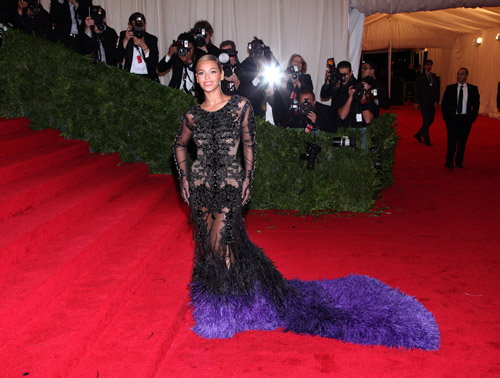 “Beyoncé Has a Room Dedicated to Beyoncé,” the Huffington Post cracked about an amazing GQ interview in which Beyoncé reveals she’s “more powerful than my mind can even digest” and has a personal historian who documents her every waking moment.

“I’ve worked harder than probably anyone I know, at least in the music industry,” writer Amy Wallace quotes Bey as saying.

And should she forget any one of her own dazzling triumphs, there’s a special temperature-controlled room in her office suite ready to remind her. Because here, Wallace tells us, is “virtually every existing photograph of her, starting with the very first frames taken of Destiny’s Child, the ’90s girl group she once fronted; every interview she’s ever done; every video of every show she’s ever performed; every diary entry she’s ever recorded while looking into the unblinking eye of her laptop.”

Yes, Beyoncé has the celebrity equivalent of a college girl’s dorm room festooned with pictures of herself.

Except, Beyoncé is Beyoncé, not some down-at-the-heels student. That dorm rat has pictures snapped on an iPhone — Beyoncé has a “visual director” who works incredibly long hours and “has shot practically her every waking moment, up to sixteen hours a day, since 2005.”

Wallace, who got a look at said footage, saw Beyoncé pictured still in bed, singing to her husband at a small dinner party and “shaking her famous a** onstage.”

Wallace also got a peek at a video diary entry Beyoncé made in which she admonished herself to let herself be afraid, and to “make love to my husband.”

Beyoncé “rules the world” by starring in HBO documentary >>

Beyoncé tells the reporter that the reason for the archive is so she can obsessively go over her performances with an eye towards perfecting them. When she performs, in fact, she always watches a DVD of the show. “The next morning, everyone receives pages of notes,” writes Wallace.

The ultimate goal: iron control of her own money-making brand. Okay, then, goal reached. No more need to have a room-sized scrapbook. Really!

“I now know that yes, I am powerful,” Beyoncé says. “I’m more powerful than my mind can even digest and understand.”

Oh Bey, you don’t even know how amazing you are, it’s just beyond comprehension.