Talk show host Anderson Cooper has a famously short fuse, having leveled rants at everyone from Star Jones to Amanda Bynes. This time he went nuts over a NYC pedestrian discarding a banana improperly. 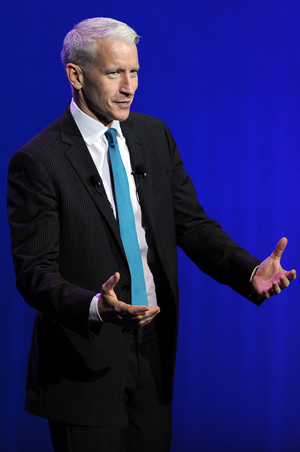 The CNN journalist is well known for going off on famous people whose actions have displeased him, but this time he took aim at a Manhattan litterbug.

On Thursday’s Anderson Live, Cooper admitted that when he saw a woman on his street attempting to stuff a banana peel into a mailbox, “For some reason, I don’t know why, it so bothered me.”

The audience went into gales of laughter as Cooper said, “I stopped dead and started yelling at her. I said ‘You do not put a banana peel into a mailbox!'”

True. You don’t. What else do you not do, Anderson? You don’t yell at strangers in public.

The banana lady, clearly freaked out by Cooper’s passionate pro-mailbox outburst, next tried to drop the banana peel right on the mailbox and get away.

No sauce, said Cooper. “I put the banana peel back into her palm,” he said. “I said ‘Go walk across the street and put it in the garbage can!'”

Co-host Marlon Wayans mocked him: “You’re like Superman if he never turned into Superman,” he said to Cooper about the comic book reporter-turned-superhero. “You’re like Clark Kent.”

No way, Wayans: Clark Kent was mild-mannered. Cooper, not so much.

After ex-The View host Star Jones suggested he came out as a ratings goose for his talk show, Cooper called out Jones for lying about her gastric bypass surgery and using her View post to pay for her wedding. He also implied she was irrelevant: “I haven’t thought about Star Jones in I don’t know how long.”

He also took on Amanda Bynes after she tweeted a request to the POTUS to “fire the cop who arrested me.” Cooper quipped, “If you don’t know who she is, join the club,” and then made a list of “Things More Important Than Amanda Bynes’ Tweet,” which included a Kanye West tweet about how much he hates “big a** striped scarves.”

Cooper has also admitted to confronting other strangers in public. On Kathy, Cooper told Kathy Griffin about a fellow airline passenger who tried to take surreptitious pictures of him. “I grabbed the guy on the shoulder and said something to the effect of ‘B*tch, what the f**k are you doing?'”