The first official portrait of Catherine, Duchess of Cambridge, was unveiled in London today, and many are saying it’s the least flattering depiction of the future queen they’ve ever seen. 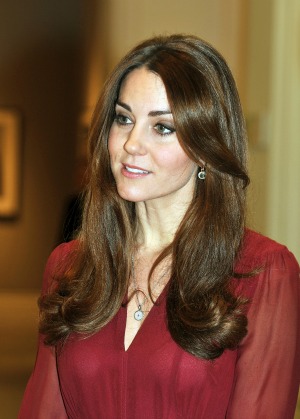 Kate Middleton pulled her face out of the toilet today long enough to view her first official portrait — and many say she shouldn’t have bothered.

The oil painting, created by British artist Paul Emsley, depicts Kate as somewhat older than her years with lines under her eyes and a dour expression. The image can be viewed at the National Portrait Gallery website.

“This is the most bland and predictable royal portrait in living memory. It is the sort of safe, uncomplicated, pedestrian image one might expect to see in a High Street photographer’s window,” said art critic David Lee.

“It is perfectly adequate for the boardroom of a supermarket but entirely inadequate for a national collection. There is neither character or personality here beyond the obvious.”

“This is an intelligent, thoughtful and educated sitter with no less than a degree in art history. She deserves better. We deserve better too, and so does the future. This is the bargain basement of royal portraiture, an artless mistake that should have been foreseeable by those who commissioned it,” Lee added.

He’s not the only one who hates the thing. “Fortunately, the Duchess of Cambridge looks nothing like this in real life,” said Robin Simon, editor of the British Art Journal. “I’m really sad to say this is a rotten portrait.”

Kate, who viewed the portrait with her husband Prince William while wearing a burgundy dress with no hint of a baby bump, was much more complimentary of Emsley’s work.

“I thought it was brilliant,” she told the gathered press. “It’s just amazing. Absolutely brilliant.”