Sharon Osbourne has paws and claws out for Lady Gaga because she says the singer is bullying her daughter Kelly, but some are calling the mama bear’s actions even worse. 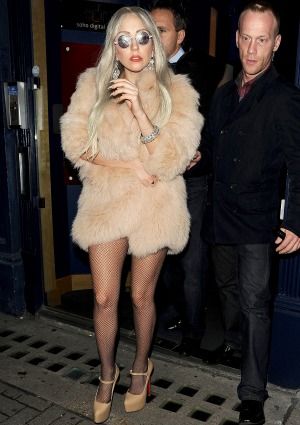 Kelly Osbourne stirred up a hornet’s nest of angry Lady Gaga fans, and now her mom has rushed in to fight her battles for her.

The trouble started when Kelly dissed Gaga’s style on Fashion Police, saying she looked fat and was probably pregnant because she was wearing a burka to an event.

Sharon Osbourne is known to be a fierce defender of her family, and this was no different. She immediately fired off a missive to Gaga’s manager, demanding she call off her fans. Gaga’s response was less than satisfactory.

In an open letter to Kelly and Sharon on her website, Gaga wrote that Kelly chose a “less compassionate path” and criticized the Fashion Police correspondent, saying her work is “rooted in criticism, judgment, and rating people’s beauty against one another.”

“Your show breeds negativity, and over the years has even become comedic in nature. It glorifies you and Joan Rivers pointing in the camera, laughing, and making jokes about artists and celebrities as if we are zoo animals.”

“To see you blossoming into a beautiful slender woman who makes fun of others for a living is astounding,” Lady Gaga added. “Why not help others? Why not defend others who are bullied for their image and share your story?”

Sharon Osbourne is not amused. She wrote a little open letter of her own, ripping Gaga to shreds for being a big meanie to her little girl.

“By your actions to Kelly right now, you have shown me that you are nothing more than a publicly seeking hypocrite and an attention seeker,” she posted on Facebook. “You know it would have been much more dignified of you to do this privately. I am calling you a bully because you have 32 million followers hanging on your every word and you are criticizing Kelly in your open letter. Are you so desperate that you needed to make this public?”

“When I see you wearing fur, and using it as a fashion statement, the fact that defenseless animals have been killed so you can get your picture in the press is abhorrent to me. Shouldn’t you be teaching your ‘little monster’ fans to respect animals and life?”

“In closing, stop wearing fur, stop looking for publicity, and stop using your fans to belittle not just Kelly but an endless stream of celebrities. A word from you would stop all the hideous, negative and vile threats from your ‘little monsters.’ Let me know if you want to continue this debate. I’m an open playing field for you my darling,” Sharon finished.

No comeback from Lady Gaga as of yet.