In the words of Chastity, from 10 Things I Hate About You, “I know you can be overwhelmed, and you can be underwhelmed, but can you ever just be whelmed?” 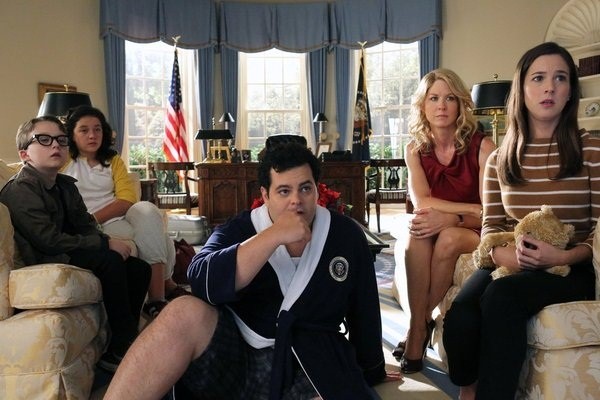 The new 1600 Penn left me feeling, like, whelmed. It was neither a complete disappointment nor very stimulating. It existed and for 30 minutes I watched it. When it ended… it was over.

Becca’s surprise pregnancy becomes front-page news when someone leaks a recording of a conversation she had with her stepmother (Jenna Elfman) after an interview when they thought the mics were off. Whoops. The used-to-be-perfect daughter goes into freak-out mode. Ultimately, though, she’s saved when her hapless brother, Skip, suckers her into a day of relaxing in the pool (hence the episode’s title, “The Skiplantic Ocean”).

While Becca falls apart, her stepmother, Emily, is in charge of keeping the news from Becca’s two younger siblings: Marigold and Xander. Emily pulls the kids out of school to keep them from hearing the news from someone in class. It’s not long before they’re on to the fact that Emily is trying to keep a secret and the white lies she tells to earn Becca’s trust quickly spiral out of control. 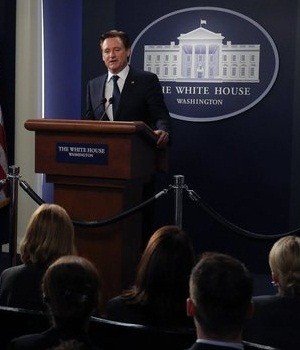 How does Becca’s dad (Bill Pullman) deal with all of it? By pacing down to the sit room and having a heart-to-heart with the Joint Chiefs of Staff. Everyone has parenting advice that ranges from hugs being the greatest weapon to following the lessons of Buddhism. 1600 Penn‘s POTUS takes it all in stride and, somehow, manages to learn from this advice. Oh, and he takes out a small terrorist cell.

In the end, everyone rushes to her aid. Skip does so in his usual idiot manner by trying to explain away her mistake with the whole embarrassing truth. When she’s called the “First Slut” on a news program, her dad takes off for the briefing room and kindly, but sternly supports his daughter. It’s touching, I guess.

Basically, there was nothing particularly wrong with 1600 Penn. It had its funny moments: Skip’s water guns filled with tea and lemonade, how the president handles his press secretary coming out of the closet, and almost all the lines that are spouted while in the Situation Room. It also had a lot of over-the-top, trying way too hard moments, too… like nearly everything with Skip. No one who can get into college is that stupid.