Who knew Charlie Sheen had any connection to Chris Guerra? After making a mega-donation to the deceased paparazzo’s funeral fund, the actor explained his motives. 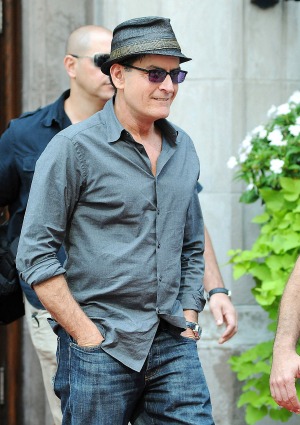 Charlie Sheen‘s donation toward the funeral expenses of the paparazzo who was killed while tailing Justin Bieber’s car is no small gesture. On Wednesday, the actor cut a check for $12,000 to the family of Chris Guerra.

How’d the Anger Management star know the young man who was killed? It turns out he didn’t, exactly, but is friends with another photog who was close to Chris. When word reached the actor a fund had been set up by Guerra’s family, he broke out the checkbook.

Along with a photo of the $12,000 check Charlie Sheen wrote to Vicky Guerra, TMZ managed to get a comment from the actor on the donation.

“A tragic incident like this erases the line between the photographer and the subject,” the 47-year-old shared.

“It’s an unforgiving moment that begs us all to be human and work as one to prevent this in the future.”

The father of five, who has two daughters with actress Denise Richards and twin sons with Brooke Mueller, added, “As parents, we are all not supposed to bury our children. My deepest condolences to the families involved.”

In reaction to the New Year’s Day incident, Justin Bieber released the following statement: “While I was not present nor directly involved with this tragic accident, my thoughts and prayers are with the family of the victim. Hopefully this tragedy will finally inspire meaningful legislation and whatever other necessary steps to protect the lives and safety of celebrities, police officers, innocent public bystanders, and the photographers themselves.”

The funeral of 29-year-old Chris Guerra is reportedly a private affair scheduled for Friday.

How about a round of applause for Charlie Sheen’s donation to Chris Guerra’s family?