Troubled starlet Lindsay Lohan has been accused of stealing yet again — this time from a longtime Taylor nurse Lohan befriended while working on Liz & Dick. 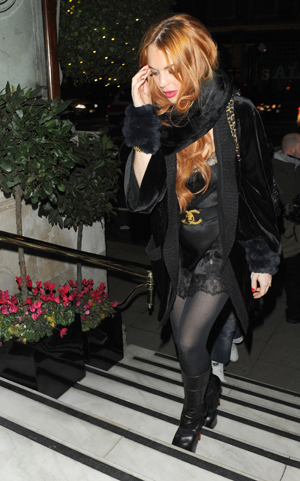 Reports have surfaced that hot mess Lindsay Lohan stole a bracelet from an Elizabeth Taylor associate and planned to make a copy with a jeweler, then replace the real thing with the copy.

RadarOnline reports that said bracelet used to be Taylor’s. She left it to her longtime nurse in her will. After Lindsay and the nurse became friendly on the set of Liz & Dick, Lindsay clapped eyes on the bracelet and praised it highly.

Later, Lohan visited the nurse at home, and after she left, the bracelet was gone.

What are the odds? “The nurse initially gave Lindsay the benefit of the doubt, thinking that she had just accidentally forgotten to take the bracelet off after trying it on,” RadarOnline reports.

But after requests for the bracelet’s return went nowhere, the nurse realized the bracelet had been intentionally lifted and threatened to call in the law.

Lindsay Lohan to be charged with grand theft >>

Lohan reportedly texted the nurse to say, “Elizabeth would be very upset with how you are behaving.”

Lohan had previously told Jay Leno that the same nurse had gifted her with a vintage Taylor fur as well.

“My entertainment lawyer, he knows the nurse that was with her for about seven or eight years, so I became good friends with her and she was on set most of the days I was working and she actually gave me one of Elizabeth’s furs,” Lohan said on The Tonight Show.

But she wanted the bracelet back, and eventually one of Lohan’s minions brought it back.

If we are keeping track (aren’t we?) this is just the latest in a long series of accusations of theft leveled at Lohan. To wit: