SheKnows sits down with the cast of A Haunted House, Marlon Wayans’ new “found footage” horror-comedy. Find out what the stars said they’re really scared of, and about Marlon’s plans to go buck naked in the sequel. 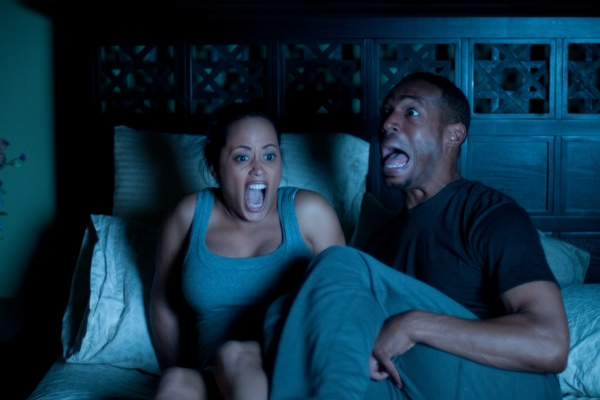 You know Marlon Wayans won’t pass up an opportunity to make fun of a film series that is past its prime. The latest target of his jokes: Paranormal Activity and other “found footage” films, with his romance-horror-comedy (yeah, you read that right), A Haunted House.

The film follows Marlon’s character Malcolm and his lady, Kisha, played by Essence Atkins, as a couple who moves into a haunted house. When Malcolm realizes Kisha is possessed by a demon, he takes every measure to rid her of the spirit.

Amidst the satire, we also get a few sexy scenes, with up-close shots of Marlon’s famous butt.

“You see a lot of it,” Atkins laughed, as she told us that she would put up with a haunted house in order to have a man with a butt like Marlon’s.

Ever the outrageous comic, Wayans took the opportunity to one-up Atkins.

“Wait till you get the full frontal,” said Wayans. “It’s crazy. We’re going to have to do that in IMAX.”

WATCH OUR INTERVIEW WITH MARLON & ESSENCE

Marlon’s friend Affion Crockett, who plays his cousin in the film, added that Marlon also likes to brag about his strength. Between filming the guys had a push-up contest to prove their masculinity.

“Skinny guys kind of have that thing where one of us wants to be the strongest but at the end of the day we’re both skin and bones,” said Affion. Watch our interview with Affion and David Koechner to see who won!