Sex and the City prequel The Carrie Diaries premieres on the CW on Jan. 14, and young star AnnaSophia Robb shares her secrets for prepping to play the younger version of iconic Manhattanite Carrie. 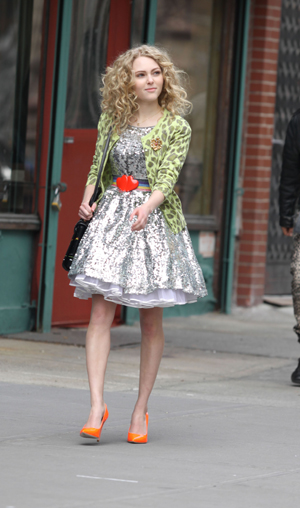 AnnaSophia Robb’s secret weapon that won her the lead role on the CW’s The Carrie Diaries? A dorky polka dance.

The 19-year-old actor could be television’s next big thing, but it was awkwardness that really endeared her to the Carrie Diaries‘ casting department.

“They told me that I got the part because I did a little chicken dance at the end of my audition, after they asked me about my prom,” Robb told Teen Vogue, which features Robb on its cover for the February 2013 issue. “I’ve got rhythm, but not the moves to go with it, and I guess they liked that I wasn’t afraid to be goofy.”

Robb certainly wasn’t chosen for her resemblance to Sarah Jessica Parker — “Carrie Bradshaw may be the one privileged suburban teen whose parents bought her a bigger nose as a graduation gift,” as the New Yorker puts it.

But she is working hard on trying to emulate, though not imitate, SJP.

“I’m trying to adopt some of the mannerisms,” Robb told the New Yorker. “She plays with her hair a lot.”

Robb says she’s trying to catch a vintage Sex and the City episode every day, so as to more accurately evoke the adult Carrie and her pals.

Costume designer Eric Daman is also working to get Carrie-esque fashion details into Robb’s on-screen outfits. Since the show is set in the 1980s, a notably ugly era of fashion, Daman faced a tough design challenge in making the costumes look authentically of the era, yet not hideous (see: stirrup pants, big shirts, giant shoulder pads).

Check it out: New The Carrie Diaries sneak peek! >>

Accordingly, the show came up with a novel gimmick: Carrie’s fashionista mom dies, leaving her closet to her daughter to raid! Squee, that’s totally worth having your mom die!

Wait, no it’s not. And Sex and the City informed us Carrie was raised by a divorced mom.

“Carrie’s mom left her this closet which to me is like [a] Pandora’s box of different eras of fashion,” Daman told the New York Daily News. “She may be wearing boots from the ’70s or a ’60s bow blouse to her internship. She’s mixing and matching from different eras, not just the latest ’80s trend.”

The CW makes a date with The Carrie Diaries >>

“We are calling it ‘aspirational authenticity,'” Robb explained to the New Yorker. “The pieces will remind you of the eighties, but it is also something that if you were watching the show you’d go, ‘I’d wear that.'”

So no pointy winklepicker boots or neon Flashdance cut-up sweatshirts? All righty, then.