They broadcast the Oscar nominations live each year, but here are the top 5 things you didn’t see on TV on Thursday morning. 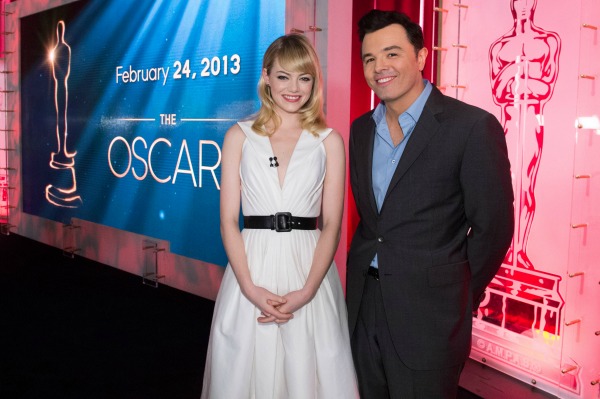 While most of you were getting ready for work this morning and watching the Oscar nominations from the comfort of your own home, SheKnows was there in the building watching all of the action go down.

The live broadcast takes only eight minutes from start to finish, but there’s so much else going on in the theater. The good news is that we’re here to take you through the top five things you missed backstage at the Oscar nominations.

Like the Golden Globes, the Oscar nominations happen each year beginning at 5:38 a.m. That is how precise they are with the time. The reporters, however, started setting up and trickling in at midnight to get their cameras in place a full five and a half hours before the Oscar nominations are even announced. To keep the media happy and awake, a full hot breakfast is served with bacon, breakfast burritos, and even Jamba Juice whipping up strawberry-banana smoothies. Even though the food is delicious, don’t even think about bringing a snack inside with you. You’ll be stopped at the door by security.

Most of the on-camera talent is required to be in full hair and makeup at a very early time. The wardrobe tends to be upscale, with colorful dresses the choice of most entertainment reporters. What you won’t find on anyone at 3 a.m. is heels. The ladies were all lounging in UGG boots, flip-flops and sweatshirts over their designer dresses. Comfort is always key, even in the wee hours of the morning.

This is the first time since 1972 that an Oscar host has presented at the nominations. If anyone was expecting the Family Guy creator to phone it in like James Franco did in 2011, think again. SheKnows talked with the show producers, Neil Meron and Craig Zadan, and they confirmed that MacFarlane is talking his role very seriously. He’s attending every meeting, he’s working with his writers and he’s very relaxed and funny in the role. This could possibly be one of the best Academy Awards in recent memory. His confidence behind his work showed this morning. He owned the room and played well off of Emma Stone. The Ted creator won over a roomful of very tough critics: No one is more jaded than a pack of reporters.

After the eight minutes of airtime has occurred, there’s a mad dash to interview as many players in the entertainment industry as possible. The media wants to get feedback about the nominations and inside scoop on what will happen on Feb. 24. A line forms around Academy president Hawk Koch, the executive producers and legendary film critic Leonard Maltin, who offers his spin on how the Academy voted. SheKnows talked with Maltin, who thinks that the director’s branch at the Academy is going to ask for more slots in the Best Director category for next year. He has a good point: Nine movies were nominated for Best Picture and only five directors are allowed to be nominated for Best Director. It really doesn’t make sense, so this issue may bring some future rule changes to the nomination process.

Yes, they’re in the room too. The studio executives hold court in the back of the theater and, while many reporters moan and groan under their breath, it’s the studio representatives who make the most noise. They clap, shriek in excitement and even yell as the nominations are being read live on television. The more nominations their studio gets, the bigger the bragging rights and more importantly, the bigger the box office.

Don’t forget to watch the Academy Awards on Sunday, Feb. 24 on ABC.