Yep, we get it. The People’s Choice Awards is the fun, hip, cool, casual awards show where fans express their celebrity adulation and celebs fall all over themselves with gratitude. The unique format enables celebrities to cut loose a bit. But did last night’s acceptance speeches go too far? 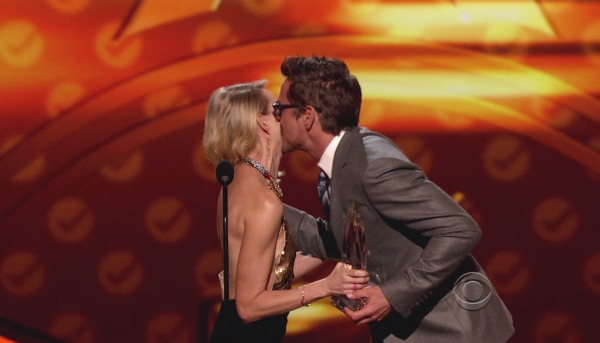 Whether or not you’re a fan of Robert Downey Jr., we can all respect him for breaking away from “tabloid favorite” to become one of Hollywood’s biggest comeback kids. Everyone was jubilant when he stepped onstage to receive his People’s Choice Award for Favorite Movie Superhero. Everyone, save Naomi Watts, who looked a bit uncomfortable when RDJ made out with her cheek for about three seconds too long. We understand that thanking the fans over and over again gets boring and that each star wants to show their gratitude in a unique way, but we’re just not sure how to feel about Downey Jr.’s “giving and receiving love” bit. Did you think it was unique, or weird?

When the breathtaking Taylor Swift took the stage to receive her award for Favorite Country Artist, presenter Olivia Munn pretended to take it back, Kanye style. Taylor replied with a quick-witted, “This always happens.” This was meant to be funny, but Olivia took just a bit too much mic time and ended the joke awkwardly with, “I’m not going to be this person, I’m going to be over here.” Swift replied with a clipped, “Thanks.” Why did this stunt feel like a way for Munn to generate all kinds of Google traffic the next morning?

When Mr. The Voice, Adam Levine, took the stage to accept Maroon 5’s Favorite Band award, he jerked the award out of bandmate James Valentine’s hand and then interrupted himself to compare his speech to Taylor Swift’s, saying that her “This always happens” comment was “genius.” We can’t quite figure this out. The multiple mentions make us feel as though Adam Levine thinks Taylor Swift is saying she always wins awards, rather than making reference to how her awards keep getting taken away from her onstage. Was Levine making fun of Swift, or just joking? We can’t really tell. One of the first rules of comedy is: If you have to explain your joke, it’s probably not that funny.

One of Hollywood’s most successful funny boys, Adam Sandler, won the People’s Choice Award for Favorite Comedic Movie Actor. His idea to list off his favorite things, many of which were random and hilarious, lost its energy in the too-long execution. Adam’s list takes over a minute and a half to get through, making it kind of painful toward the end. The audience was likely waiting for the music to start playing over Sandler’s voice. Thankfully he was spared that humiliation.

Ellen raked in her 13th People’s Choice Award for Favorite Daytime TV Host, so she’s an old pro at the perfect acceptance speech. She said “I’d like to hug each and every one of you, but it’s flu season.” Then she thanked her team, and proceeded to list off famous lesbians. When she got done delivering a few more funny lines, she stepped away from the mic to receive her thunderous applause, and then stepped back to present an award. This is how funny and unique is done, as is evidenced by her 13th award.