We parked it on the red carpet at the People’s Choice Awards and got a chance to catch up with Taylor Spreitler and Nick Robinson on the show’s nomination, their future plans, and their thoughts on recent celeb news. 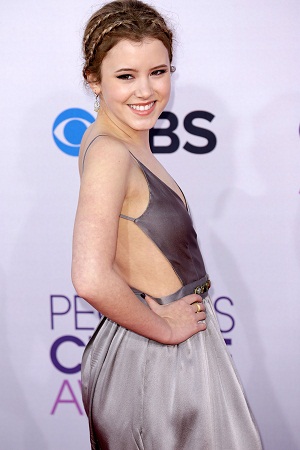 The two young stars from Melissa and Joey, nominated for the People’s Choice Award for Favorite Cable TV Comedy, walked the red carpet and SheKnows got a chance to catch up with them.

Taylor Spreitler was especially talkative, making up for Nick Robinson’s lack of words (it kind of seemed like maybe he was shy), but we got quite a few things out of Spreitler!

First, she has a taste for older guys. When SheKnows asked her who she’d like to have on the show to share a kiss with, the 19-year-old said Jax Teller, from Sons of Anarchy. Jax is played by the adorable Charlie Hunnam who is about 13 years older than Spreitler. We still can’t blame her, though!

As for who she’d most like to work with, Spreitler said she’s just excited to be with the cast and crew of Melissa and Joey. The show has been on hiatus for more than a year now and she misses her “family.” The Melissa and Joey family, by the way, include Melissa Joan Hart (Clarissa Explains It All) and Joey Lawrence (Blossom).

While a lot of young stars see to find themselves in precarious positions, Spreitler and Robinson seem to stay out of trouble. We even had a hard time getting them to talk about other celebrities — they’re just too cool for all that drama. What did they think of Justin Bieber’s incident with pot? They both agreed there are worse things he could be doing.

Check out their interview for more on their “favorite” celebrities…

Don’t expect to find them doing anything gossip-worthy. When asked how they’d celebrate a win, the two underage actors agreed that Shirley Temples sounded like a great way to toast the evening.

In the end, Melissa and Joey was beat out by Awkward for Favorite Cable TV Comedy. We still think Spreitler and Robinson deserve a Shirley Temple, though.