SheKnows former Girl Crush of the Month Rachael Leigh Cook and her hubby Daniel Gilles wow us as the cutest couple on the red carpet at the People’s Choice Awards. 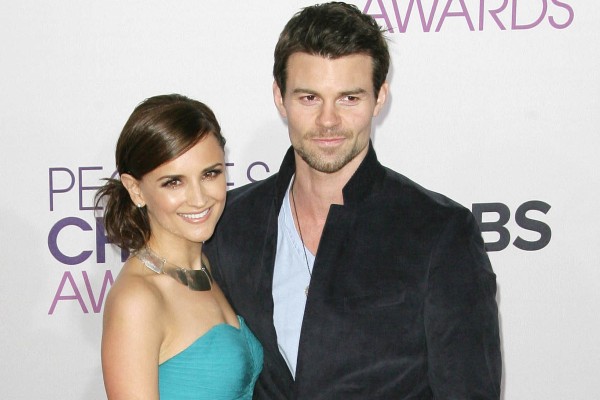 Perception star Rachael Leigh Cook (and our former Girl Crush of the Month) made her red carpet comeback Wednesday night as she wowed the crowd in a gorgeous, blue-green Oliver Tolentino gown at the 2013 People’s Choice Awards.

“I’m just happy I fit into it,” Cook joked when we chatted with her before the show. “The rest is gravy.”

But it wasn’t just the dress that made her look. Cook was joined by her sexy hubby, Vampire Diaries star Daniel Gillies, wearing a complimentary blue suit. The perfect accessory.

WATCH OUR INTERVIEW WITH THE CUTE COUPLE

When questioned about her best beauty advice, Rachael told us, “A husband to keep you warm on cold nights like this.”

The duo — married for eight years — is extremely supportive of each other. So much so that when asked about their upcoming plans for the year, each spoke about the other.

“Daniel’s going to work on at least two other shows,” Rachael told us, referring to Season 4 of The Vampire Diaries and the medical drama Saving Hope. “There’s an exciting development in there,” Daniel added of Elijah, his character on Diaries, before quickly mentioning Rachael’s second season of Perception.

“This season we’re going to learn more about my character’s personal life, maybe even meet her ex-husband,” said Cook.

So who will the lucky guy be? Rachael says he’s yet to be cast, and sweetly suggested her hubby to star. Daniel however, said she had someone else in mind.

“She’s been saying Ryan Phillipe for the past couple of weeks,” and laughed as she playfully hit him with her purse.

Too cute! You can catch Daniel on The Vampire Diaries, returning to the CW on Jan. 17, and Rachael in Perception this summer.