Christina Aguilera did something we never expected her to do at the 2013 People’s Choice Awards. 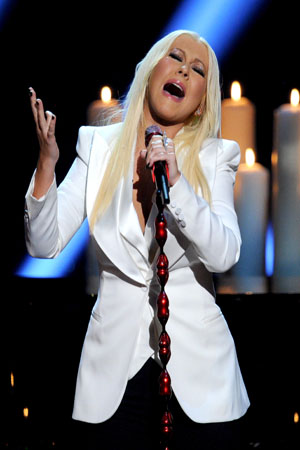 We had to do a double take when Christina Aguilera started her performance of “Blank Page” at the 2013 People’s Choice Awards.

Related story Christina Aguilera Knows Childhood Trauma, Which Is Why She Works Hard to Protect Her Kids

You might want to sit down for this one: She was wearing pants!

The 2013 People’s Choice Awards: The complete list of winners >>

The 32-year-old singer and former judge on The Voice looked almost conservative in her slim black pants and cream-colored blazer. It’s a nice departure from her typical tight and two-sizes-too-small dresses.

Then again, the song required a bit more serious gear than the platinum blond is known for.

“The song is about making mistakes and realizing you can’t go back but you can start over with a blank slate,” a source told US Weekly of the new song.

“Christina expresses herself through her songs and this one is very emotional,” the source added. “This year is a new beginning for her and she’s excited.”

She even got a little choked up on stage.

“Thank you for giving me this form of expression and letting me use my voice,” she told the crowd while accepting her “People’s Voice” award. “It means so much to me. When I sing I believe it truly is the only time I can truly be myself.”

But, back to the pants. Christina, just so you know: Pants? Good. No pants? Bad.