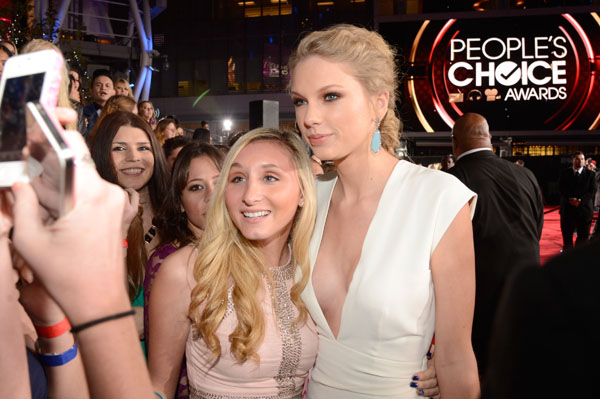 Our jaws dropped when we saw Taylor Swift on the red carpet at the 2013 People’s Choice Awards in her low-cut Ralph Lauren.

The next thought? She looks super-duper miserable.

Swift did put on a brave face to accept her award for Favorite Country Artist. She thanked her fans on stage and even seemed to choke up a bit when she thanked them for “caring about her.”

To add insult to injury, Olivia Munn crashed some of Swift’s television time with her Kanye West-esque stage crash. The Magic Mike actress clutched Swift’s award as a joke (we guess?) while the songstress tried to snatch it back.

At least one person was appreciative of the off-the-cuff moment: Maroon 5’s Adam Levine.

“Taylor Swift is super charming,” he told the crowd as he accepted his award.

“I was trying to think of something to say, and it’s not happening,” the Maroon 5 singer said. “[Taylor] said, ‘This always happens.’ That’s genius, by the way.”

Potential pair? She fits his type — tall and leggy — to a T.

What do you think of Taylor Swift’s awkward on-stage moment with Olivia Munn?